More and more educated: The women in the MENA region 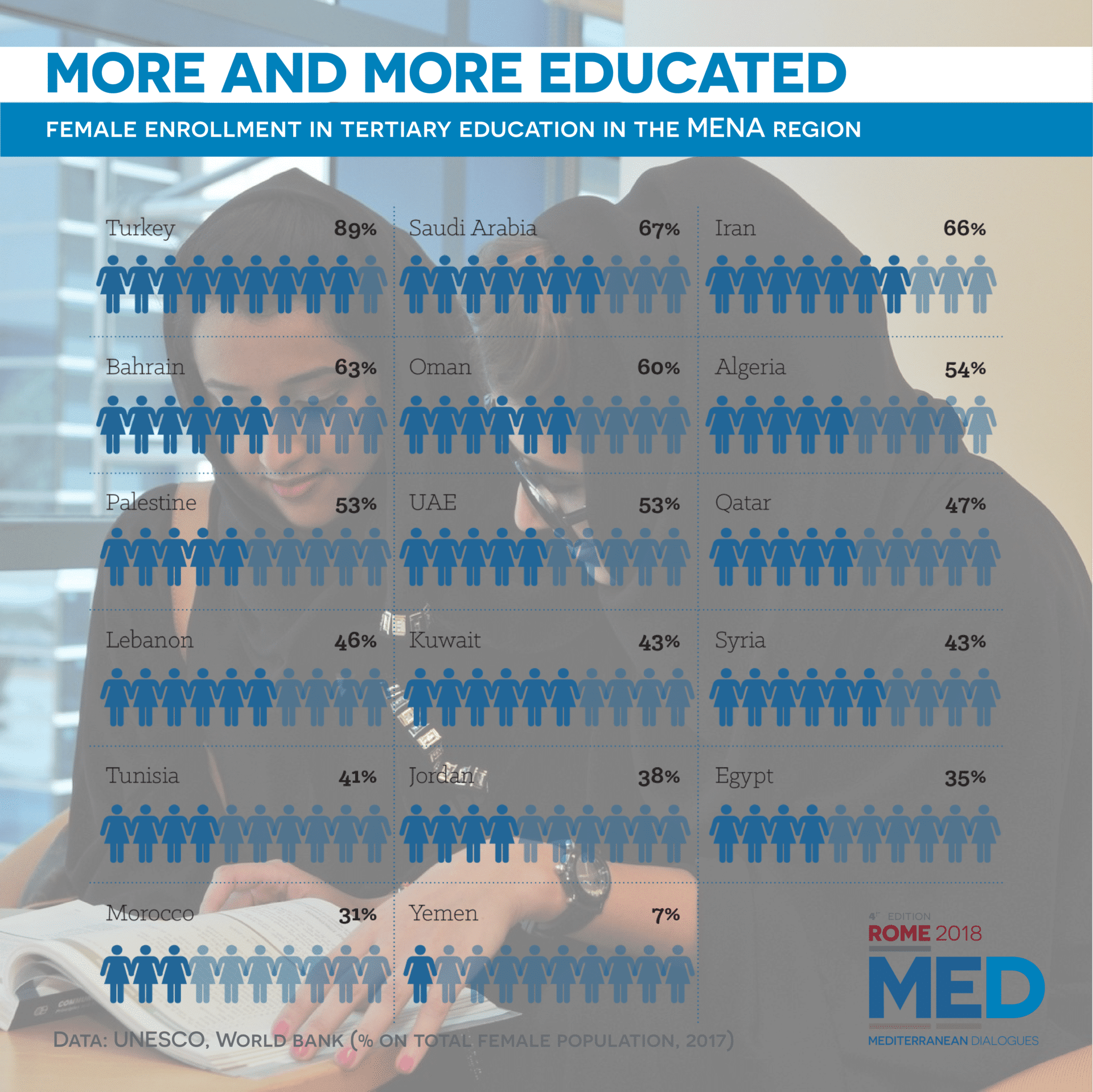 The enrollment rate of women in tertiary education is a useful indicator to assess the female participation in the civil society. The situation in the MENA region is diversified and ranges from high levels of education in Turkey to poor results in countries such as Yemen. Overall, the situation in the Mediterranean is improving. A higher involvement of women in political and economic affairs would probably increase the growth rates of the Mediterranean countries and, consequently, lead to increased wealth for the whole population.

Turkey 89% – The women in the country have been claiming and struggling for gender equality for a long time. Since 1985 Turkey is a member of the Convention on the Elimination of all Forms of Discrimination Against Women (CEDAW), and since 2002 it is part to the Optional Protocol. Women play an increasing role in different sectors of society, spanning from politics, enterprises and academy.

Saudi Arabia 67% – One of the sectors of society where women are significantly involved is education. In 2017, women have access to government services such as education and healthcare without the need of consent from a guardian, and since 2018 they can freely drive a car.

Iran 66% – Female education is one of the most significant achievements in Iranian society. The Iranian Revolution inaugurated radical social changes that triggered a higher enrollment of women in universities. Today, more than 60% of all university students in Iran are women.

Bahrain 63% – Women play a prominent role in Bahraini society if compared with other States in the Middle East. They gained the right to vote in the national general elections in 2002, and they are scaling positions in education, science, financing and banking sectors.

Oman 60% – Deep reforms in the field of education have led to a steady increase of women’s enrollment from the primary up to the tertiary level. Female persons are entitled to enter jobs in almost every kind of professions, with a share of 40% of women employed in highly-skilled job categories.

Algeria 54% – After the war of independence in 1962, the role of women in Algerian society has radically changed. They can vote and run for general political elections. Women occupy 25% of seats in Parliament, and the level of gender discrimination in entering the labour market is overall low. Social, cultural and family constraints sometimes prevent them from entering universities or professional jobs.

Palestine 53% – Palestinian women are still experiencing some forms of discrimination if compared with their male peers. The difficult economic situation of Palestinian territories complicates their enrollment in the highest levels of the educational system. In 2003 a Ministry for Women’s Right was established.

United Arab Emirates 53% – The role of women in the country has partially changed after the discovery of oil and the subsequent modernisation of the country. Women’s involvement in the public sector has risen steadily and today accounts for about 65% of the total workforce, with a 30% share of women in high-responsibility positions.

Qatar 47% – According to the World Bank, the female population in Qatar represents just 24.1 % of the total. Notwithstanding, more than half of the women are employed in highly-skilled positions – the highest in the Arab world – as a result of the increasing enrollment in tertiary education. Unfortunately, women are affected by a wage gap and paid from 25 up to 50% less than their male peers.

Lebanon 46% – Lebanese women enjoy good living standards, and they attend institutions and tertiary education. The country has a long-standing tradition of women participation in the job market.

Kuwait 43% – Since the discovery of oil, the participation of women in education and, generally, in civil society has dramatically increased. According to the 2017 edition of the Global Gender Gap Report, there have been improvements in gender parity in professional and technical workers as well as healthy life expectancy.

Syria 43% – The civil war marked a breakpoint in the situation of women population in Syria, triggering higher levels of violence. In the late ’90s, the country inaugurated a period of female emancipation, with an active role of women in society. During the civil war, as a reaction to terrorists’ violence, many women organised and joined female brigades to counteract IS operations.

Tunisia 41% – Women played a central role in the revolution that took place in the country in 2011. Notwithstanding, only 41% of women are enrolled in tertiary education and they represent just 26.5 % of the total labour force in the country.

Jordan 38% – The Jordanian system embodies elements that grant women rights. Queen Rania has used her position and power to support the women’s rights and to encourage their emancipation in family and business affairs. Unfortunately, only 17.7% of the country’s workforce is made up of women.

Egypt 35% – Egypt is characterised by a conflict between traditionalism and empowerment of women Egyptian women still face obstacles to accessing secondary and tertiary education mainly in the rural areas.

Morocco 31% – Women in Morocco have experienced a long time of achievements. After independence from France, women have been given full access to the educational system. Nevertheless, the overall enrollment rate of women is still low, and it is far lower in rural areas.

Yemen 7% – The country is ranked as the most unequal in the world, according to the Gender Inequality Index. Women have limited access to public life, both politically and socially, since cultural attitude reserves women a low status in the family and the community. The armed conflict started in 2015 – and still underway – triggered an awful humanitarian crisis which has worsened the condition of women in the country.