The Rome MED This Week newsletter provides expert analysis and informed comments on the most significant issues and trends in the MENA region. Today, we focus on the significance of Pope Francis’ historic visit to Iraq and its possible implications on both the country’s domestic inter-faith dynamics and the region’s tense geopolitical situation.

Pope Francis’ upcoming four days visit to Iraq (5-8 March) carries memorable significance as it marks the first-ever papal visit to the country, which, as the birthplace of Prophet Abraham, represents a historic land for all three Abrahamic faiths. Strongly desired by the Pope himself, this visit has two major objectives. First, to provide a sorely-needed spiritual boost to Iraq’s beleaguered religious minorities, especially the Christian community – one of the world’s oldest – which has been slashed by years of war and persecution from 1.5 million in 2003 to less than 300,000 today. Second, but no less important, it aims to advance the Vatican’s bridge-building efforts with the Muslim world, thanks to the meeting between Francis and one of the world’s most influential Muslim leaders, Ayatollah Ali al-Sistani, an event that, according to many, would represent major progress for both Shiite-Sunni and Muslim-Christian relations in Iraq. Against this backdrop of hope, however, the visit will take place in a country ravaged by decades of conflict that is now facing a second deadly wave of coronavirus infections and renewed violence. Although bombings and other violent attacks have declined over the past few years, at least 32 people were killed and more than 100 injured in a twin suicide bombing at a market in Baghdad last month. The message of peace Pope Francis will convey may thus play an essential role in reviving the country’s domestic cross-sectarian dialogue and furthering reconciliation, with a possible positive spillover on the tense geopolitical environment currently at play.

A message of coexistence from two interfaith dialogue advocates

“Whilst this is the first meeting in history between the head of the Catholic Church and the head of the Shia Islamic establishment, it follows years of exchanges between the Vatican and Najaf. Given that both men support the most vulnerable in society, it is a profound statement on the importance of peace, compassion and tolerance in a turbulent region where unfortunately too many still believe in violence as a solution. There will be no signing of a document but both men are advocates of interfaith dialogue and condemn violence committed in the name of religion. The meeting will undoubtedly strengthen the voices and organizations who still believe in dialogue.”

In the footsteps of Abraham, not only for Baghdad but for the region

“Pope Francis’ visit to Iraq is of great political relevance for the Middle East and international affairs. A country martyrised, a focal point of the geopolitical instability of the post-Cold War, it is what Francis had in mind when in 2014 warned that a “piecemeal” World War III may have already begun. In a world marked by antagonism and polarization, the Pope – following the trip motto “You are all brothers” – continues his journey started with the Document on Human Fraternity co-written with the Grand Imam of al-Azhar and his last encyclical ‘Fratelli Tutti’ to announce that if we are all brothers, we cannot treat each other as slaves and our political bond should be reflected in a new vision of social friendship.”

A message of courage amidst a tense geopolitical scenario

“Pope Francis’ visit occurs at a critical time. While the Middle Eastern crisis deepens, the region has fallen down from Western governments’ foreign policy priorities. Iraq’s own stability is particularly at stake as the country is a backyard for Iran to settle scores against the United States and a target of Turkey’s ambitious expansionism. Iraqis themselves search for justice. The government strives to rein in paramilitaries, mass protests are met with repression and the country risks an economic collapse. As all this unfolds, US foreign policy focuses elsewhere and Europe shows unassertiveness. Visiting Iraq in the midst of a pandemic and conflict, Pope Francis sends a message of courage. It challenges Western foreign policy increasingly driven by interests and deprived values, places Iraq under the spotlight of international attention and rekindles hope of Iraqis – of all religious and ethnic backgrounds—who have seen their prospects for a better future gradually shrinking.”

“The people of Iraq are already impressed by the Pope for choosing to visit the country despite the exceptional security and health circumstances. Everyone is excited. The Christians (Chaldeans, Assyrians and Armenians) believe the visit will draw global attention to their plight, promote tolerance in Iraq and reduce migration of Christians abroad. The Iraqi Shiites see this as a recognition that Najaf (not Qum, Iran) is the ultimate seminary centre of Shiites. The Kurds want the Pope and the World to witness not only Kurdistan’s ethno-religious diversity and harmonious coexistence among its communities, but also how their Region became a safe haven for displaced Christians and Yezidis during the ISIS invasion.”

“All Iraqis, not only Christians, look forward to Pope Francis’ visit to their country. The papal trip carries spiritual meaning, as it is expected it will bring peace and hope by supporting pluralism, peace and religious freedom. This message will be pivotal for a country that no long ago suffered from a great deal of violence and instability and today is experiencing a phase of significant challenges (as testified by the extraordinary security measures adopted for the occasion). At the political level, it will draw attention to the need for political and economic reforms, for reconciliation among communities, and the end of foreign interference. These grievances are particularly felt by younger generations, looking for perspectives but caught in the paradigm of domestic violence and political instability.”

Minorities remain the most vulnerable group

“Security and land theft, both in urban and rural settings, remain the biggest challenges for minorities in Iraq. In the Nineveh Plain where the Pope is visiting, security is an ongoing challenge which neither Baghdad, Arbil nor the international community have solved in the best interests of the local population. A patchwork of rival militias control security in the area, some backed by Iran, some Iraq, some by the KRG, and some are the local communities themselves. The Pope’s visit could highlight the success of locals representing the primary security actor in the town of Qaraqosh, where the rate of return is approx. 70%, versus areas controlled by Kurdish Peshmerga (30%) or Iran-backed militias (7%).” 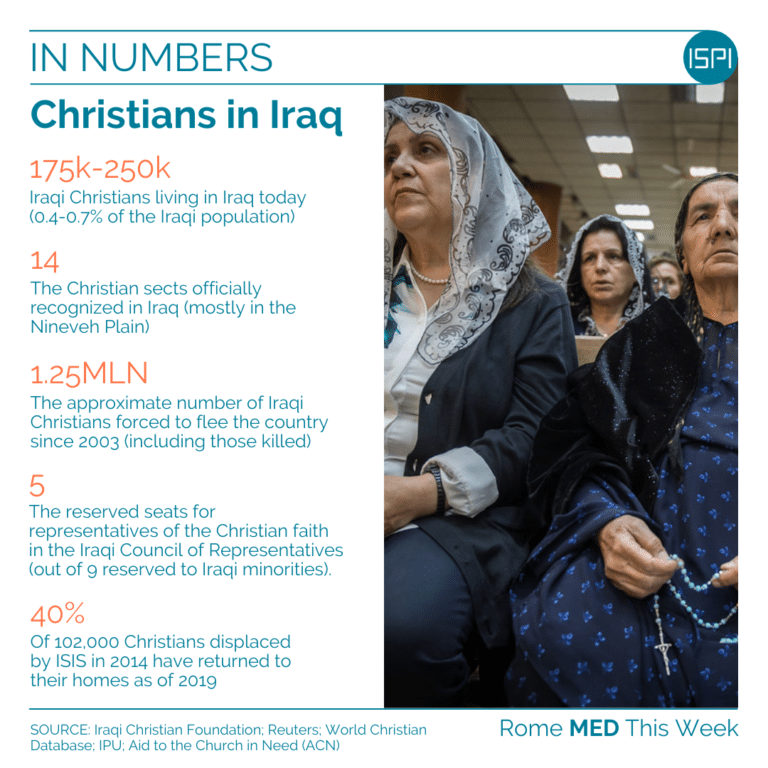