The MED This Week newsletter provides expert analyses and informed comments on the most significant developments in the MENA region and beyond, bringing together unique opinions on the topic and reliable foresight on future scenarios. Today, we turn the spotlight on Afghanistan, where the Taliban’s takeover of the capital Kabul will lead the country to a new rule, with uncertain consequences on the geopolitical and humanitarian side.

After twenty years of international occupation, Afghanistan is back in the Talibans’ hands. On August 15, while (former) Afghan President Ashraf Ghani left the country, the Taliban triumphantly entered the presidential palace in Kabul. In early April, following the announcement that the US and NATO troops would begin to withdraw, the Taliban started a military offensive marked by the seizure of almost all of Afghanistan’s 34 provincial capitals in a matter of months. During this advance, the Afghan national army – funded and trained for twenty years by NATO forces – simply collapsed with little or no opposition. Still, the Taliban’s sweep of the country and the capture of Kabul have exceeded even the least optimistic predictions. The capital, where thousands of Afghan citizens in past weeks had tried to take refuge from the Taliban rule, fell within a few hours. While several diplomatic missions hurried to evacuate personnel before the Taliban’s advance, chaotic scenes were reported at the international airport, with Afghans overwhelming the tarmac and temporarily bringing evacuation flights to a halt. On their side, the Taliban announced a “general amnesty” for Afghan workers that supported the US-led Coalition, ensuring an “inclusive” government under sharia law. Nonetheless, several UN agencies are raising alarms over a situation that could presents “all the hallmarks of a humanitarian catastrophe”. Some countries showed diplomatic openings to the Taliban, with embassies remaining open in the country – among them, Russia and China. On the other side, US President Joe Biden has openly defended his decision to withdraw US troops from Afghanistan despite the collapse of the Afghan government amid the Taliban’s relentless advance, facing mounting criticism for a decision that draws parallels to the US exit from Saigon in 1975. Although the US authorities plan to evacuate thousands of former Afghan collaborators, most Afghans find themselves alone, with rising uncertainty over their upcoming future.

Experts from the ISPI MED network react to the unfolding crisis in Afghanistan after the Taliban swiftly took control of the country.

The Taliban: not a reliable partner

“The Taliban are desperately seeking international recognition. For this reason, they reassure the international community by guaranteeing the end of violence and a peaceful transition. But what is now happening in the peripheral areas and the provincial capitals reveals a very different approach, based on indiscriminate killings and violence of all kinds against the military, the officials of the now-defunct Afghan state and their families. Thus, unlike the image they want to propose, the Taliban should not be considered reliable interlocutors. What demonstrates the risk of a Taliban-dominated Afghanistan is mainly given by the galaxy of insurgent groups and terrorists operating alongside them who will now have a safe location from which to operate: from the Eastern Turkistan Islamic Movement (ETIM; mainly composed by Uyghurs) to the Terik-e Taleban Pakistan (that will continue to use Afghan soil to strike in Pakistan), and al-Qaeda, the terrorist organization from which the Taliban have never distanced from. In addition, the presence of the Islamic State Khorasan group, the Afghan branch of what was once IS, contributes to this disappointing scenario.”

The looming spectre of a humanitarian catastrophe

“The precipitous U.S. and NATO military withdrawal catalysed the Taliban’s rapid accession to power. The speed of their advance across Afghanistan has been staggering. The situation is volatile. Much of the population feel traumatised. Residents in Kabul characterise the city as ‘dead’, ‘silent’ and ‘terrified’. Women are notable by their absence. Taliban promises of stability, security and political inclusion remain rhetorical. There is a grave disconnect between the sophisticated statements of the political office in Doha and the actions of fighters inside Afghanistan. Over half the population is affected by the humanitarian crisis.  Over 3.5 million people are internally displaced, and Covid-19 is rife. Afghanistan is highly aid-dependent and it is one of the world’s poorest countries. Any support from the population will be contingent upon Taliban actions going forward.”

Why the Taliban have emerged as the winners

“US was seeking a ‘decent interval’ between its departure from Afghanistan and whatever happened thereafter. The Taliban displayed indecent haste in exploiting the vacuum caused by the departure of the US. A key reason was that by opening direct talks with the Taliban in 2018 and bypassing the government in Kabul, the US had legitimised the Taliban at the expense of the government in Kabul. Finally, even as everyone kept voicing support for “an Afghan-led, Afghan-owned” peace process, in reality, each one was trying to cut their own side deals with the Taliban. History tells us that there have only been winners and losers in Afghanistan, seldom any lasting compromises. Taliban, ably supported by their backers, have clearly emerged as the winners.”

“Tehran is still observing the situation and obviously will continue its relations with Afghanistan under the Taliban’s rule. Tehran has maintained its good relations with the Taliban office in Doha and expressed on a peaceful Afghan-owned peace settlement. However, Iran has been cautious about how to react to the Taliban’s take over. There are also different perspectives on the Taliban’s takeover of Kabul and the withdrawal of US and NATO troops from Afghanistan. The Iranian hardliners and conservatives view it as the Taliban’s victory and defeating the US in Afghanistan. But, another opinion also considers it as much more concerned about the future of Iran-Afghan relations. Since recent events, it is expected Tehran engage more with the Taliban and other parties in Afghanistan through regional formats to ensure the future Taliban government is inclusive and recognized by the region and international community.”

Moscow’s approach on Taliban: to wait and see

“Russia’s decision to keep its diplomatic mission in Afghanistan under the current circumstances came as a product of its long public and probably backchannel talks with the Taliban. Russia designated Taliban as a terrorist organization in 2003 yet it jumped the train of diplomatic engagement with the Qatar-based political wing of the movement alongside China, the US, and others. During the visit of the Taliban to Moscow on July 9, Russia drew its own redlines which evolved around four issues: the potential spillover of instability from Afghanistan into Central Asia; the threat of ISIS to Russia and its allies in Central Asia; drug trafficking; and the safety of the country’s diplomatic and consular missions. So far, the Taliban have followed their promise: they provided Moscow with safety guarantees and even secured the outer perimeter of the Russian Embassy on Monday. President Putin’s special envoy on Afghanistan, Zamir Kabulov, said Moscow “was in no hurry” to recognize the Taliban regime as legitimate rulers of the country and will make this decision depending on how responsibly they will govern the country.”

The Taliban in charge: changes and continuity

“Taliban conquered power through force, violence, killings, something Zabiullah Mujahid justified as a necessary “collateral damage”. They now claim that “the war is over”, as they achieved their two primary goals: the withdrawal of foreign forces and returning to power. Still, the majority of Afghan people do not trust their conciliatory stance, doubting the peaceful transition of the movement from an insurgency to an institutional force (a process that will feed internal struggle). The institutional system they will propose is still under construction, as different, conflicting ideas and interests are at stake. Two proposals are strongest than others: the return to an Emirate, which implies “continuity” with their former government but also the risk to further alert the international community; or a new hybrid system, with some electoral, representative mechanisms and a strong executive/overseeing power conferred to a clerical Commission. At the same time, they have to figure out a formula to fit the interests and claims of Afghan political groups/leaders who still have some local constituencies or have facilitated their conquest of Kabul.” 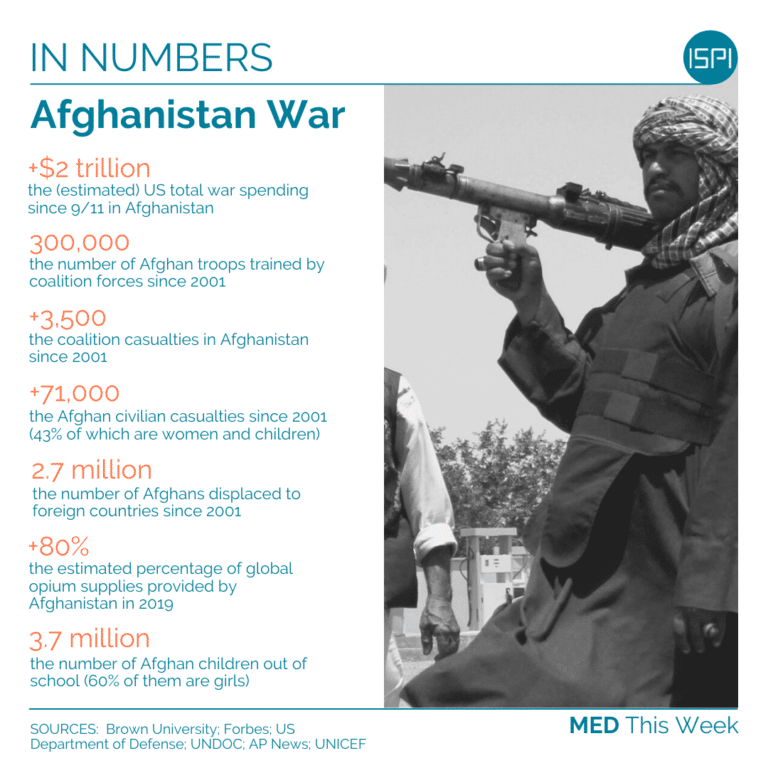