The MED This Week newsletter provides expert analysis and informed comments on the most significant developments in the MENA region, bringing together unique opinions on the topic and reliable foresight on future scenarios. Today, we focus on the US and Turkey, as Joe Biden’s decision to formally recognize the 1915 Armenian genocide is likely to have a deep impact on Ankara’s relations with Washington and NATO.

Joe Biden is the first US president to have formally recognized as genocide the 1915 crimes committed against the Armenian people by the Ottoman Empire. The day prior to his acknowledgement, President Biden conveyed his decision to his Turkish counterpart, Recep Tayyip Erdogan, in a reportedly tense phone call. The US’ validation of the genocide was immediately rejected by Turkish authorities, who warned the White House not to “change or rewrite history”. Biden’s decision comes at a complicated stage for US-Turkish bilateral relations following Turkey’s purchase of anS-400 air defence system from Russia (Ankara received its first instalment in mid-2019). Nevertheless, Ankara’s recent diplomatic moves actually suggested a possible rapprochement between Turkey and the United States, along with its NATO allies, as demonstrated by the Ukrainian dossier, wherein Erdogan raised his voice in defence of Kyiv’s territorial integrity. Against this backdrop, the concrete consequences of Biden’s move on bilateral ties remain uncertain. Publicly, Erdogan voiced his commitment to “work together” with the US President and agreed to have a sideline conversation with Biden at NATO’s June summit. Nonetheless, this move’s ramifications for US-Turkey relations are still unclear, as is Ankara’s potential reaction, especially in light of the economic crisis it currently faces.

Experts from the ISPI MED network react to the US recognition of the Armenian genocide.

Biden is sending a clear message to Erdogan

“Biden’s decision to recognize the massacres of Armenians under the Ottoman Empire as a genocide targets different subjects – Turkey, of course, but also world opinion and a small but vociferous domestic “ethnic lobby’ such as the Armenian-American – and aims at achieving different objectives. Among them: reaffirming US commitment to protect human rights and, along with it, reclaiming the moral high ground in international politics. The symbolism extends, of course, to the complicated relationship with the Turkish ally. Here the message seems to be explicit. Biden’s decision represents a warning to Ankara and its free-riding inclinations: a way to tell Erdogan that the United States have the means and can muster the resolve to punish him if needed. However, Biden’s is a risky bet, as it could misfire and foster further nationalistic and anti-American sentiments in Turkey.”

Erdogan needs the US more than Washington needs him

“Biden is simply aware that for the first time in many years, Erdogan needs the US more than Washington needs him. Biden is, accordingly, using this window as a lever, hoping to correct some of Erdogan’s behavior, including his anti-democratic actions and close ties to Russian President Vladimir Putin. At the same time, Erdogan is out of options that would help accommodate the Biden Administration. With his disapproval rate sinking at home,  Erdogan is unlikely to agree to relax his autocratic control of Turkish society, lest the already vigilant opposition surges and votes him out. And abroad, Erdogan is simply in too deep with Putin to get out. If Erdogan were to return the S-400s to Russia, Putin could immediately impose trade and tourism sanctions, targeting Turkey’s ailing economy and further eroding Erdogan’s support base.”

“Since the beginning of the year, Turkey has revived its diplomacy in the MENA region to respond to the changing international and regional dynamics. Joe Biden’s victory in last year’s US election has been a major factor, although not the only one, in persuading many countries in the Middle East, including Turkey, to recalibrate their regional policies to accommodate the new administration in Washington. In this shifting geopolitical environment, Ankara, which benefited from the permissive atmosphere under President Trump, has intensified diplomatic efforts to defuse tensions with its neighbours, particularly in the Eastern Mediterranean. Talks have been resumed with Greece over disputed maritime borders, along with attempts to revitalise relations with Egypt, after eight years of strains, and Israel. From a Turkish perspective, rapprochement with US partners in the region would also be helpful in resetting the relationship with Washington.”

“Looking from Europe, the Biden Administration has carefully administered this recognition – from word selection to timing of the phone call with President Erdogan. I think these were steps to limit the impact since bilateral relations are already strained. According to the European Union, the EU and the US share a strategic interest in a stable and secure neighbourhood and that the EU should seek a coordinated approach with the US in its relations with Turkey, including addressing current challenges. So I would expect the Turkey dossier to be an important one on the agenda during the EU-US Leaders’ Summit in June. The European Union is trying to reframe its relationship with Turkey along the lines of collaboration rather than conflict. So being on the same page with the US, defining a structured policy cooperation would strengthen the EU’s hand. 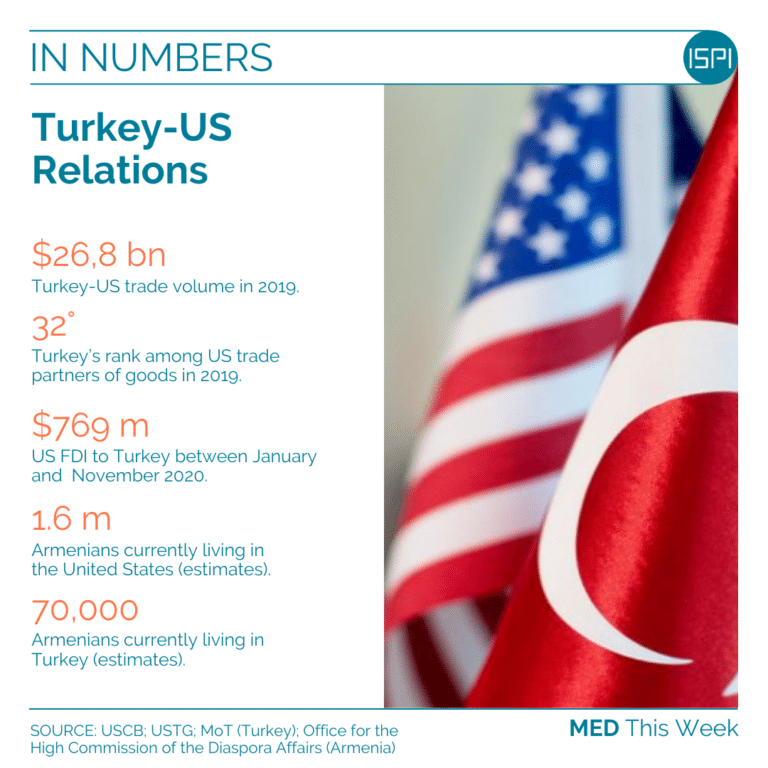