ISPI MED This Week | Beirut, One Year On: The Last Call for Lebanon

The MED This Week newsletter provides expert analysis and informed insights on the most significant developments in the MENA region, bringing together unique opinions on the topic and reliable foresight on future scenarios. Today, we focus on Lebanon, where an unprecedented economic crisis is putting the population in dire living conditions. Meanwhile, a year after the explosion at Beirut’s port, the political class has failed to form a new government.

One year after the Beirut blast, Lebanon is still struggling with its worst economic crisis since the 1975-1990 civil war. After the tragic explosion — which killed 200 people, injured 6,500 and displaced 300,000 — Prime Minister Hassan Diab’s resignation was not followed by the formation of a new government. On July 26th, President Michel Aoun appointed the Sunni businessman and former PM Najib Mikati to form a new cabinet. The decision came after the approval of the majority of lawmakers — 72 out of 118 — with the Shiite parties Hezbollah and Amal backing the PM-designate against Christian lawmakers, who firmly opposed him. Mikati’s appointment follows Saad Hariri’s decision to step down after nine-month-long attempts at forming a new government. Crucially, political stability is necessary for foreign financial aid, particularly following the EU’s warning last May that it would sanction Lebanese politicians responsible for blocking the formation of a new government. Mikati, who has already assured he will implement the France-led reform plan, faces a plethora of critical issues. The economic crisis, which exacerbated the impact of the Covid-19 pandemic, has led to a 90% drop in the value of the Lebanese pound in less than two years, while the Lebanese population is bearing the brunt of hours-long power cuts and several shortages of fuel, medicine, and basic goods. Against this backdrop, the population has mobilised all over the country in recent years, demanding real change in the nation’s politics and transparent investigations into the explosion at Beirut’s port — something that will further complicate Mikati’s mission.

Experts from the ISPI MED network react to the political deadlock and economic crisis of Lebanon one year after the Beirut explosion.

A “deliberate depression”: the responsibilities of a political class

“Lebanon’s political leaders need to put the interests of their country and people ahead of their own and take responsibility for a crisis of their own making. In failing to do so, they have driven Lebanon into what the World Bank has described as a “deliberate depression” resulting from government inaction. The depth and breadth of the reforms necessary to put the country on a path towards recovery could undermine the kleptocratic grip of the country’s leaders over state resources and their patronage networks. However, without these reforms, Lebanon will sink even deeper into the crisis. To begin a genuine reform process, the leadership must internalize the fact that Lebanon’s survival requires a credible government of independent experts with limited exceptional powers – in keeping with the exceptional nature of the crisis. The government ought to address the economic and financial aspects of the crisis and put together a medium- to long-term plan for what a Lebanon 2.0 could look like. Otherwise, the same self-serving interests that have scuttled all previous decisions related to reforms will drive the country over the brink.”

“A year after the August 4th Port explosion and 21 months since the “October uprising,” Lebanon continues to sink “towards, possibly, the top 3 most severe crises, globally, since the mid-nineteenth century,” as per the World Bank. Local and regional factors weigh heavily on the country’s political and economic meltdown. On the flip side,  the anti-establishment groups’ shortcomings can be attributed to, (i) violence perpetrated by the regime, spearheaded by Hezbollah and the parliamentary guard, which owes its allegiance to the Speaker, Hezbollah’s closest ally; (ii) a global pandemic that re-dissected the country following a rare moment of unity in 2019 that transgressed divisions; (iii) a devastating economic crisis, compounded by the banks, which left everyone running on fumes; (iv) deep ideological divisions amongst them. Despite all, the sweeping victories of the anti-establishment groups in student elections, the Beirut Bar Association, and the Order of Engineers have stoked concerns within the sectarian ruling elite. Hence, the different constituencies of said elite are looking at the upcoming parliamentary elections in order to re-legitimize themselves, forcing the international community into dealing with them again, while avoiding implementing reforms. In that case, the definition of insanity needs to be reimagined!”

The ruling elites benefit from a fragmented society

“Lebanon’s corrupt political system remains in place because the system’s elites are adept at overcoming their differences to maintain the status quo. They are ignoring international and domestic calls for significant reform because such reform would bring accountability that would expose the elites’ financial — and other — transgressions. However, there is a glimmer of hope in the growing trend towards formal mobilization and coalition building spearheaded by Lebanon’s newly formed, independent political parties, student unions, and professional syndicates. The ruling elites benefit from fragmentation among their reformist opponents, so while this formal mobilization trend is in its early days, it is significant for Lebanon’s recovery.”

“International aid is never devoid of the political considerations around it, not least one full year after the Beirut Port explosion. In this latest crisis facing Lebanon, political forces behind donor agendas will need to ensure that aid is not instrumentalised by the entrenched ruling class as a tool to treat the symptoms of the economic collapse rather than addressing the crisis’ root causes. Western sanctions are being mulled over while needs are skyrocketing due to hyperinflation’s effects on the poverty cycle. Thus, to be effective, both foreign policy tools will need to work hand in hand so that aid is instrumentalised as a carrot, while sanctions used as a stick. The objective should be to cajole the political and financial establishment into a fair and transparent solution to the economic crisis, not to mention accountability for the Beirut Port explosion.”

The EU’s “unavoidable yet ineffective” sanctions

“The large majority of the Lebanese ruling class has been educated in Europe, mostly in France. This is why their perception of the EU is centred around France. They clearly know that a single European country is still more effective than the Union when it comes to Lebanon. After all, European sanctions are unavoidable yet ineffective for two reasons: first, the EU is not perceived as a powerful political entity; second, to avoid economic sanctions the Lebanese ruling class would have to agree to reforms that would significantly limit their power. In that case, not only the EU but the whole international community, too, have limited powers in persuading the sectarian leaders of a Lebanon that is more fragmented than ever.”

The Saudi and Iranian strategy: change Lebanon for Lebanon to remain the same

“To a large extent, Saudi Arabia and Iran have cooperated with their Lebanese protégés since the 2019 revolts to halt any meaningful political change. They are now cooperating with them to change Lebanon, only for Lebanon to remain the same, to paraphrase Tomasi di Lampedusa’s maxim. The Saudis, fully backed by the US and France, aim to regain the political influence they lost after the 2011 Arab Uprisings. For its part, Iran is determined to help Hezbollah preserve its power in the country. Ironically, in the pursuit of their competing ends, they now converge on endorsing a ‘new’ government that would keep Lebanon’s old political system intact, even as this would exacerbate the alienation of the Lebanese people. This odd convergence also serves as a test for the ambiguous rapprochement the Saudis and the Iranians are pursuing at the regional level.” 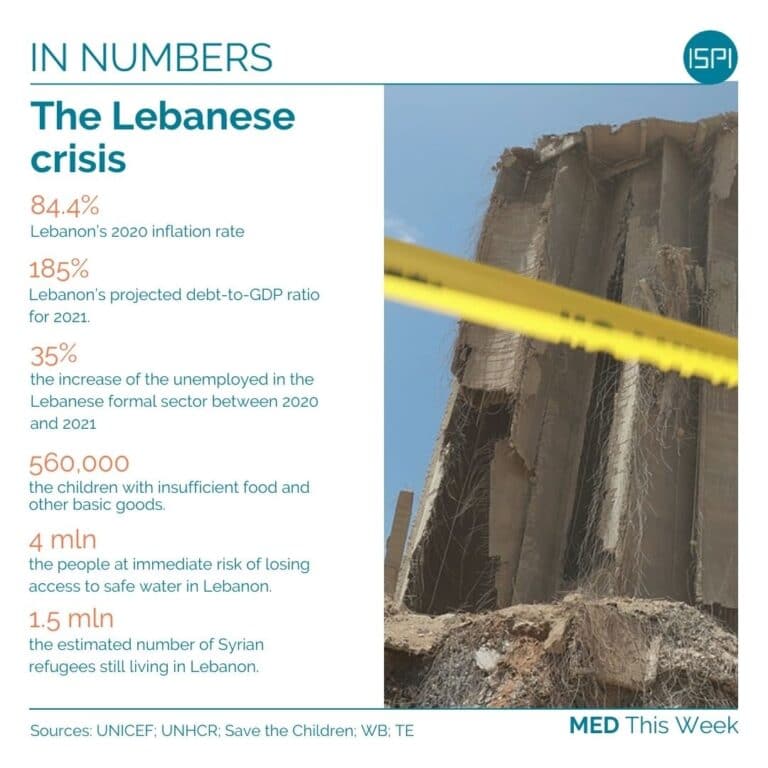