ISPI MED This Week | Israel’s Evolving Ambitions: Fostering Ties in the Mediterranean and Beyond

The MED This Week newsletter provides expert analysis and informed comments on the MENA region’s most significant issues and trends. Today, we focus on the recent Sharm el-Sheikh meeting between Bennett and al-Sisi. Together with opening a new chapter in Israel-Egypt ties, the summit also represents a step forward in the process of normalisation that has been underway for a year between Israel and its Arab neighbours, with potential developments for the region and beyond.

On September 13th, 2021, Israeli Prime Minister Naftali Bennett met Egyptian President Abdel Fattah al-Sisi in Sharm el-Sheikh, marking the first encounter between an Israeli premier and an Egyptian head of state in over ten years. Besides touching upon security and economic cooperation between the two countries, Bennett and al-Sisi discussed the revival of the Israel-Palestine peace process, spotlighting Egypt’s intention to play a mediating role in future negotiations. The Sharm el-Sheikh meeting is particularly relevant considering Israel’s evolving relations between its neighbouring countries. The summit occurred just a few days after the Israeli President’s visit to the Jordanian King Abdullah II and close to the first anniversary of the Abraham Accords. One year into the normalisation process with the United Arab Emirates and Bahrain, Israel is stressing the centrality of the Middle East and the Mediterranean in its foreign policy by deepening its relations with Egypt, the Gulf, and other Arab countries. At the same time, this approach is further strengthened by its emerging partnership with European partners, such as Greece and Cyprus, highlighting Tel Aviv’s increasing ambitions in promoting trade and connectivity across the region.

Experts from the ISPI MED network react to the changing foreign policy of Israel underscored by the recent Sharm el-Sheikh meeting.

“This visit represents the first official trip by an Israeli leader to Egypt in a decade. The announced purpose was to relaunch bilateral ties, strengthening and expanding them. However, with this move, al-Sisi also aspires to reinforce his role as a mediator between the Israeli government and Hamas after the last crisis in Gaza and to deepen their (already) strong energy ties in the Eastern Mediterranean. These are two issues of great relevance for both countries that go beyond security concerns (i.e., joint control of the Sinai border) and include the political and economic-energy sectors. There are also military interests at stake: in the wake of the détente triggered by the Abraham Accords, Israel aims to reaffirm its collaboration with this pivotal Arab country, while Egypt hopes to appease the Biden administration, which has recently threatened to cut economic aid to Cairo over human rights concerns. Israel could also lobby the US administration to play a more active mediating role over the Grand Ethiopian Renaissance Dam dispute —an issue of high geopolitical and strategic relevance for al-Sisi.”

Egypt and Israel’s relations warm up

“The visit to Cairo by Israel’s Prime Minister Bennett was a political event for various reasons. First, the mere occurrence of the visit was undoubtedly a boost to the new Prime Minister, as the former Premier Netanyahu had demanded it for a decade. Second, The Egyptian media publicly announced it before its occurrence and showed pictures of a warm welcome during the visit. Though not much official Egyptian information came out around it, why did Cairo encourage such a visit?

Traditionally, Egypt has based its regional role on its involvement in the Arab-Israeli conflict, reviving and reiterating its position during the recent tensions between Israel and Hamas. Its brokering of the ceasefire elicited repeated praise from many European countries and especially the US. Crucially, such praise is a stark change considering Western countries have been critical of Egypt’s track record on human rights. Its involvement in the Palestinian-Israeli conflict management is good political capital for Cairo. Similarly, in Egypt’s fight against “terrorists” in Sinai, Egyptian-Israeli coordination has been valuable, not only intelligence-wise. At the same time, Israel’s neutrality in the conflict over the Renaissance Dam is crucial for Egypt. Finally, though many civil society groups still boycott Israel and frown upon contacts with Tel Aviv given the ongoing Palestinian problem and Israel’s settlement policy and practices, the 2020 Abraham Accords are changing the architecture of regional relations. Consequently, Egyptian relations with Israel are no longer the taboo they were in the late 1970s or 1980s. On the contrary, Egypt’s public normalization with Israel looks relatively more moderate and modest and can now be strengthened without much political cost.”

Bennett’s attempt at defining a new regional policy for Israel

“The meeting between the two leaders shows the willingness to open a new chapter in the relationship between Israel and its close neighbours, demonstrated most significantly in the first public meeting between the two leaders after 11 years. Naftali Bennett, the Israeli Prime Minister, was not the sole member of his government who took steps in this direction. Isaac Herzog, the President of Israel, met with Abdullah II bin Al-Hussein the Jordanian King, while Benny Gantz (the Israeli Minister of Defence) met with Mahmoud Abbas, the Palestinian President. All these meetings join together in strengthening the Abraham Accords. This administration was eager for a significant achievement that would help them get re-elected and win a place in history, and they chose this direction to do so.”

Palestine: a win-win for both al-Sisi and Bennett

“In addition to strengthening the economic ties and resuming the flight between Cairo and Tel-Aviv, the Sharm el-Sheikh meeting will have a longer impact on Middle East politics, as it came after Egypt’s success in brokering an end to the escalations in Gaza in May. It was built on the resumed contacts between the US President and al-Sisi. Two days after the meeting, Israeli Foreign Minister Yael Lapid presented his Economy for Security plan, aiming at reaching a longer-term truce between Hamas and Israel. As such, the meeting was a win-win as al-Sisi sought to reclaim Cairo’s leading role and Bennett succeeded in doing what his predecessor, Benjamin Netanyahu, could not do. A few days later, Egypt announced it would continue with its mediation on the Gaza reconstruction, while the Israeli government has made significant compromises on its blockade on Gaza. Moreover, it is believed that a prisoner swap between Israel and Hamas is in progress through Egyptian mediation. In my assessment, the meeting proved the new Bennett-led Israeli government is much stronger than previously perceived when it was first formed. Finally, it is worth noting the meeting was held on the 13th of September, which is the anniversary of the 1993 peace accord between Israel and the Palestine Liberation Organization.”

Washington’s pull-out: the chance (and need) for a new security cooperation in the region

“There is no question that the rapprochement with Israel is driven by the US’ relative disengagement from the Middle East. The weakening confidence that Gulf and other Arab countries have in Washington’s commitment – and its ability to provide for their security – contributes to greater regionalism and the search for new partners.

While a general retrenchment by regional powers is afoot, the mood remains competitive, with each country seeking economic advantage in the wake of the coronavirus pandemic. In addition, Saudi Arabia will watch — and weigh — the payoff the UAE will gain from closer ties with Israel. This competition may hinder attempts to forge a new regional security architecture, especially in the absence of any initiative or buy-in from the Biden Administration.”

“A unique opportunity for cross-regional cooperation” in the Mediterranean

“Israel’s partnership with Greece and Cyprus, as well as the signing of the Abraham Accords, present a unique opportunity for cross-regional cooperation between Europe, the Eastern Mediterranean, and the Gulf. Predictably, we’ve seen an uptick in diplomatic activity through regional forums and summits, by Eastern Mediterranean and Gulf actors like UAE, Qatar, and Saudi Arabia. But while these actors’ strategic interests are currently aligned, the window of opportunity to turn goodwill into impactful regional projects may be shorter than imagined. Limitations around multilateral cooperation between Eastern Mediterranean and Gulf actors will depend on how effectively they are able to identify projects of common interest and — with the encouragement of their American and European allies — turn them into reality.”

Greece’s Renewed Interest in Israel and the Middle East

“Following a long hiatus, Greek foreign policy has turned its attention to the Middle East. This includes pursuing closer relations with key states in the region such as Egypt, Israel, the United Arab Emirates, and Saudi Arabia and promoting trade and connectivity in the region. While the establishment of the EastMed Gas Forum is a good example of what this policy can deliver, the European Green Deal offers additional opportunities for cooperation across the region. Such initiatives should not be interpreted through the lens of Greek-Turkish relations and their vicissitudes. Greece’s interest in the Middle East has sound historical, diplomatic, and economic foundations; therefore, the Middle East is bound to become an ever more critical item in Greek foreign policy.” 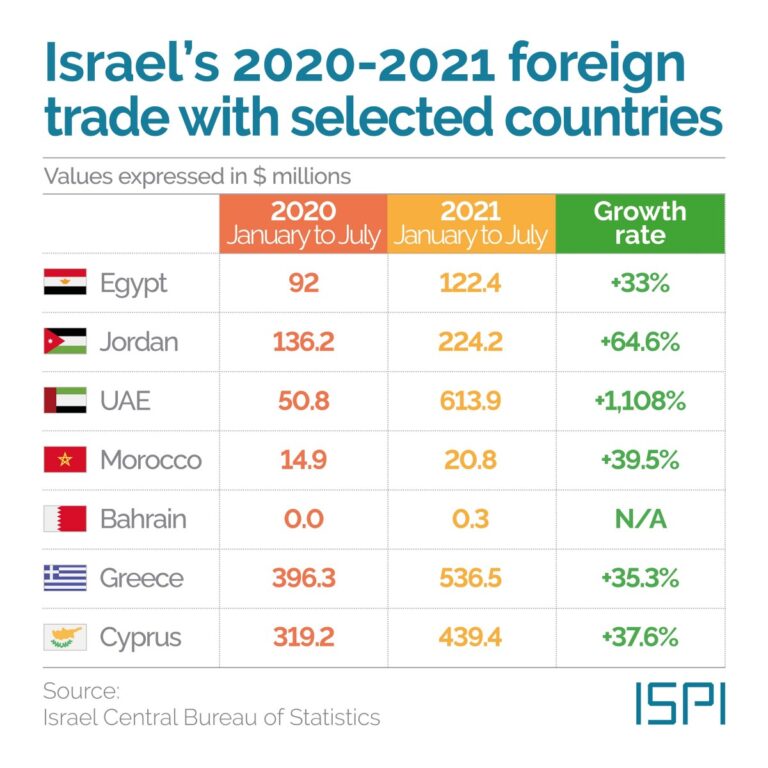