The MED This Week newsletter provides expert analysis and informed comments on the MENA region’s most significant issues and trends. Today, we turn the spotlight to Jordan – a linchpin for the region – where rumours of a conspiracy to oust the king have brought the country’s structural weaknesses to the fore.

Jordan’s image, painstakingly built by the country’s authorities as an oasis of relative stability within a turbulent Middle East, took a hit on April 3, when former Crown Prince Hamzah bin Hussein was accused of cooperating with “foreign entities” to destabilize the state. The incident, widely presented as a family disagreement, resulted in the arrest of eighteen people and Hamzah’s oath of allegiance to the Crown and the Constitution two days later. While investigations are still ongoing, the recent controversy comes as an unexpected novelty for the country. Since the Hashemite kingdom’s origins, Jordan has always been seen as an island of stability in an otherwise unstable neighbourhood. At the same time, King Abdullah II has long been held in high regard in the United States, as Washington has relied on his steadying influence and views him as a highly reliable partner. Today, Amman remains one of the United States’ closest allies in the region, especially in counterterrorism operations and intelligence-sharing in the fight against al-Qaeda and the Islamic State. Nevertheless, despite its apparent stability, the country faces substantial socio-economic challenges. Jordan has been hard hit by the coronavirus (it ranks among the highest COVID-19 infection and death rates per capita in the region), while its unemployment rate reached one-fourth of the population in 2020. Furthermore, the country is currently home to over 660,000 Syrian refugees while also hosting a large community of Palestinian refugees. Hence, coming at a particularly uncertain moment for the country and combined with pre-existing structural problems, the tensions within the ruling family risk detracting attention from long-needed socio-economic reforms.

Experts from the ISPI MED network react to the meaning of this election to Israel’s political future.

“The kingdom of Jordan has so far been spared a visit by the Arab Spring, apart from several random and discontinuous waves of protests. For years now, economic demands have been growing and calls for less corruption, and more transparency have been rising. Against this backdrop, the ruling family is not only facing challenges on the economic front but also subtle opposition from the Muslim Brotherhood, which has been very active in other countries visited by the Arab Spring as well. Moreover, Iran and its hegemony over Iraq, Syria, and Lebanon puts Jordan in a difficult geopolitical position that requires close collaboration with GCC countries to counterbalance, especially that these countries are also ruled by monarchies. Thus, at the moment, the ruling family is trying to avoid having these geopolitical challenges spill into the local political scene and cause a serious threat to its rule via a combination of chaos and uprisings.”

“One positive spill-over from the incident might be bringing Jordan back to the radar of its foreign allies, who tend to take the stability in the country for granted and have been ignoring quieting of Jordanians dissatisfied with dire economic situation in the country, further exacerbated by the Covid-19 pandemic. What Jordan needs, however, is not more loans – its foreign debt already amounts to over 90% of its GDP – but development aid and technical assistance in implementation of wise economic reforms that would not further harm the already impoverished population. Austerity is not an answer at a time when the cost of living is growing, remittances – falling, and officially one in four (and realistically more) Jordanians is out of work.”

“Jordan, a resource-poor country that was initially lauded for containing COVID-19, has struggled to manage the economic fallout. Remittances and tourism have declined as has assistance from neighboring Gulf countries. With many businesses in ruins due to COVID-19 lockdowns, the government has to do more to ensure social safety net programs help vulnerable populations climb out of economic despair. The government is also struggling to support the nearly one million refugees in the country. While Jordanians have been protesting for months, recent events involving Prince Hamzah are likely to make Jordanians think twice before going out into the streets. The government must act fast to address economic challenges while avoiding a security clampdown that could make matters worse.”

“While it is still difficult to establish the extent of the alleged coup plot in Jordan, what seems particularly intriguing are the allegations of foreign meddling. Ten years ago, while protests and dissents were mushrooming, Amman was counting on Saudi aid and Israel’s implicit support. Today, while regional powers, including both countries, are voicing support for the king, Amman is becoming increasingly concerned that the rapprochement between Riyadh and Tel Aviv can be to the detriment of its legitimacy. The recent incident at the Israeli-Jordan border and the allegations pointing to Israel and Saudi Arabia are only the most recent episodes in a stream of tensions developing since 2017. These are like a wake-up call. Jordan-Israel relations have always been based on solid shared interests and not on political calculus. It is of utmost importance to recognize this for the future of the region and the security of both countries.”

“The Biden administration is facing an unexpected crisis in Jordan where King Abdallah faces unprecedented divisions within the ruling family exacerbated by foreign meddling, the pandemic and recession. At risk is the stability of the lynchpin of the region. Saudi support for Prince Hamzah’s challenge to the King raises serious questions about the reckless and dangerous behaviour of the Crown Prince Muhammad bin Salman.  Biden has moved quickly to signal support for Abdallah.  He needs to rally international help for Jordan’s weak economy and deep structural problems. Keeping Jordan stable is critical to survival of the Israel-Jordan peace treaty which is deeply unpopular.” 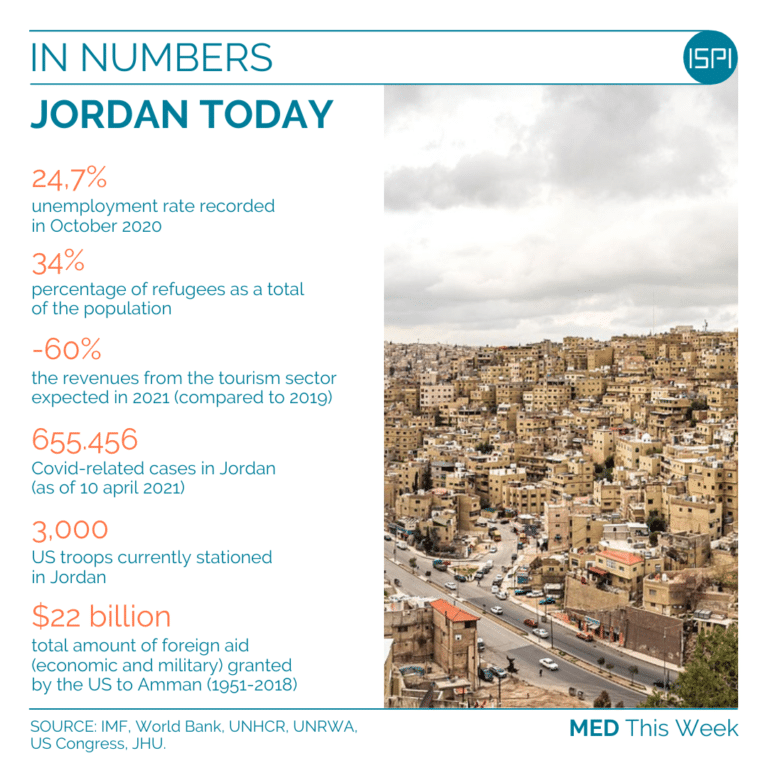