ISPI MED This Week | Twenty Years of “Endless Wars”: The Legacy of 9/11

The MED This Week newsletter provides expert analyses and informed comments on the most significant developments in the MENA region and beyond, bringing together unique opinions on the topic and reliable foresight on future scenarios. Today, we turn the spotlight on the twentieth anniversary of 9/11, one of the most significant terrorist acts in modern history and probably the single event that has had the most impact on the history of the 21st century, especially for the MENA region.

September 11, 2021 marks the 20th anniversary of the 9/11 attacks. A breakthrough moment in the history of the United States, this event has had tremendous consequences on the MENA region, too. The invasions of Afghanistan and Iraq have represented two milestones in its history, influencing radically the perception that Washington’s allies and rivals had of the United States. The years immediately following 9/11 have seen the peak of the US involvement in the Middle East, both in military and political terms. However, Washington’s engagement with the region as envisaged by the Bush administration proved soon to be unsustainable. The 2011 withdrawal from Iraq and the recent pullout from Afghanistan are the legacies of the choices made in the aftermath of 9/11. This 20th anniversary prompts a reflection on the consequences of the US disengagement from the Middle East and, more in general, on the region’s current state. What is the legacy of twenty years of the Global War on Terror? What consequences will the US disengagement have on the area, and what possibilities does it offer to other international actors like China, Russia, and the EU? And how is it going to influence the relations between Washington and its regional allies?

Experts from the ISPI MED network react to the 20th anniversary of 9/11 and of the global War on Terror.

“Over the past twenty years, the US interests in the region have remained constant, as national interests tend to do.  However, the context for securing those interests has changed tremendously, primarily due to mistaken American policies.

For about fifty years, the US had a remarkably consistent — and successful — approach to securing its regional interests by acting as a classic status quo power. Ideally, the US response to 9/11 might have reinforced this tradition and thus strengthened its ability to protect its interests. Regrettably, three consecutive American administrations decided otherwise, each in their ways, and instead, the US shifted from being the most important defender of the regional status quo to being the most crucial threat to it. And today, as the US policy pendulum continues to swing, the single most significant dynamic in the region, the one that is driving the most significant number of decisions by the widest number of actors, is the widespread perception of American withdrawal — a perception that the recent experience in Afghanistan only exacerbates. Unless this is reversed, the most likely outcome is that our interests in the region will be increasingly challenged, and our ability to protect those interests will be increasingly diminished.”

The US is still in a position to shape the MENA’s long-term future, on one condition

“The US involvement in the Middle East, as envisaged by the Bush Administration, has long ended, since 2010 to be precise, when the Obama-Biden Administration took a whole new approach to global security. They refused to provide leadership in our region and withdrew the US forces from Iraq. ISIS soon filled the void. The Afghanistan withdrawal was a repeat. The Biden Administration cannot afford a third tragic episode happening under his watch and for the US to lose credibility and influence in the entire Middle East.

The political and security dynamics in the Middle East have evolved beyond recognition. They remain in flux, and a new order is yet to emerge. Although the US remains highly influential, its leadership position is now questionable. Its military presence is minimal, almost symbolic, in both Iraq and Syria. Its rivals are increasingly powerful, bullish and at times overwhelming. The US is still in a position to shape the long-term future, but it needs to lead at the front alongside its local and regional allies, not from behind.”

The EU in the face of the US disengagement: A growing strategic autonomy?

“US disengagement from the MENA/Sahel and growing EU strategic autonomy are processes that are only indirectly linked. The former is dictated by Washington’s perception of growing great power rivalry with China and a War on Terror that is fought more via allies, proxies and other indirect means. Greater EU strategic autonomy is a function of the extent to which 27 Member States view pooling sovereignty through Brussels institutions as an effective way to realize better foreign policy results at the national level. US disengagement removes a protective layer that mitigates negative spillover effects from conflicts in Europe’s neighbourhood. This increases the cost to Europe of maintaining the fairly dysfunctional status quo of the EU’s current foreign policies. But US engagement does not increase the benefits of greater collective EU action.”

Will history (and the US) repeat itself?

“Following the end of WWII, the US sought to reshape Western Europe. After the collapse of the Berlin Wall and the break-up of the Soviet Union, America has moved to engage Eastern Europe – thus, the transatlantic community emerged. 9/11 was a milestone that set the United States on a path of remaking the Middle East. In both cases, the US was driven by a desire to remake the part of the world from where imminent threats for American security emerged so that the very sources of the threat – respectively, the USSR and terrorism – are eliminated. It took half a century for this effort to work in Europe, and It took twenty years to realize that the idea was not sustainable in the Middle East and Afghanistan. With a success story and a failure story on its record, the US seems to continue this journey in a new region and against a new rival – the Indo Pacific region is a venue to be redesigned to counter China.”

US allies in the MENA: when “redefinition” means “enhanced alignment”

“The special relations with the US are a key pillar of Israel’s foreign policy and national security. The US provides Israel with key diplomatic, security and economic support, including a commitment to preserve Israel’s qualitative military edge in the Middle East. As such, Israel would benefit from continued US involvement and presence in the Middle East. Despite the US redefinition of its strategic interests in the region, it remains engaged on those issues that are most important and relevant for Israel – preventing Iran from developing nuclear weapons, supporting Israel-Arab normalization, decreasing Israeli-Palestinian tensions and seeking ways to advance peacemaking, strengthening Jordan’s stability, and fostering regional cooperation regarding energy resources. The policies adopted so far by Israel’s new government – reversing Netanyahu’s over-reliance on the Republican party, re-establishing channels of communication with the Palestinian Authority, expanding and deepening ties with Arab states, and willingness to engage in dialogue over the Iranian issue despite policy differences – are likely to increase US-Israel alignment on regional issues. However, while working to maintain US involvement in the Middle East, Israel should also develop additional partnerships – through enhancing bilateral relations with Arab states and the EU, and through increasing its participation in regional and international organizations.”

“Twenty years after 9/11, the framework of the fight against the jihadist threat casts both lights and shadows. Today, on the one hand, the transnational jihadist faction is fragmented into different organizations and denominations, often competing against one another. In the West, it is plausible to hold that the terrorist threat has been contained and doesn’t represent an existential threat to the US or Europe.

On the other hand, the framework of the fight against the threat of jihadism appears marked by significant shadows. Al-Qaeda, albeit weakened, is still active and dangerous. Moreover, the group could largely benefit from the Taliban’s recent victory in Afghanistan (it already represents a symbolic victory for the jihadist cause at large). Furthermore, the menace posed by jihadism is growing in many other regions of the world, well beyond its sphere of action back in 2001. In particular, growing jihadi-inspired violence in Sub-Saharan Africa is increasingly drawing concern. Additionally, after their withdrawal from Bush-mandated military interventions in Afghanistan and Iraq, the US no longer seemed committed to vast counter-insurgency campaigns in far, foreign countries. To conclude, the threat of global jihadism appears less structured today yet more widespread in some ways. Twenty years later, its end doesn’t seem close.”

“Jihadism is far from being a static or rigid phenomenon. Over these twenty years, the whole jihadi movement has been fluid and dynamic, and several processes of internal reshuffling have emerged. Before 9/11, the jihadi community was fragmented and suffered from infighting and competition between its many different ideological strands. Osama bin Laden and Ayman al-Zawahiri were ones among many actors, and the very decision to execute the 9/11 attacks was an extremely divisive issue even among al-Qaeda’s top leaders. Yet, 9/11 was a watershed moment for the jihadi movement worldwide, as it enabled al-Qaeda to acquire a hegemonic position in the broader movement.

In short, the 9/11 attacks can be seen as one of those “critical junctures” or transformative events that have a deep impact on the jihadi community. Such events can profoundly affect jihadi actors: not only in terms of strategic adjustments but also at a deeper level, impacting upon their ideology and, at times, even their identity. They can amplify pre-existing fissures between different actors or strands, potentially leading to full-fledged divisions over time. Conversely, they might bring together diverse actors and foster ideological and organizational cross-breeding.”

After twenty years of political participation, no new balance in sight

“Over the past twenty years, the MENA region has experienced three major shifts: the imposition of the “War on Terror” as a new security-political paradigm; the transformative – and objectively disruptive – mobilization of popular movements and networked elites; and the rise of China as a superpower.

As seen first in the Arab Spring of 2011 and then in subsequent uprisings in Sudan, Algeria, Lebanon, and Iraq, regional states are incapable of managing the demands of the current era. As a result, there is no new equilibrium in sight, and we should expect the upheaval to continue, spread, and deepen.

These three developments inform each other in complex ways. The US-European plunge into Sisyphean nation-building campaigns helped set the scene by destabilizing the region, securitizing its politics in new ways, and precluding more productive ways to spend two decades and hundreds of billions of euros. The 2011 events cracked an already-expiring existing order, producing intrastate wars and interstate competition that will shape future great-power intrusion—including that of China, which is only beginning to unfold.” 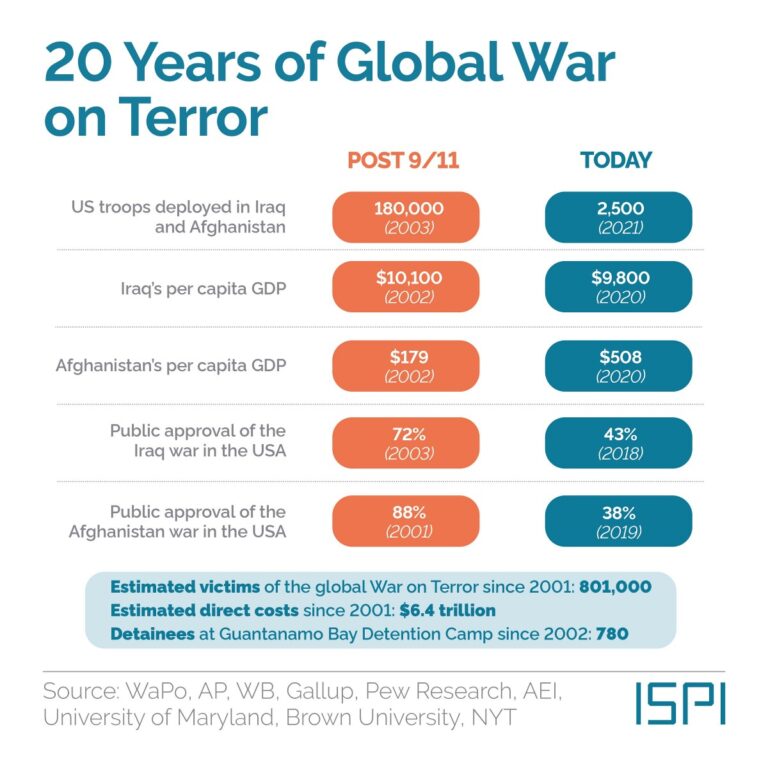