ISPI MED This Week | Lebanon on the Brink

The Rome MED This Week newsletter provides expert analysis and informed comments on the MENA region’s most significant issues and trends. Today, we turn the spotlight on Lebanon, where citizens are taking to the streets once again, protesting against the economic crisis and the political impasse.

One year after the first sovereign default of its history, Lebanon struggles to find a way out of the crisis. Following the collapse of the Lebanese pound (that, on 2nd March, reached the record-low of 10,000 to the US dollar on the black market), people took to the streets again in several cities of the country. Mainly young people, protesters denounce the general inaction of Lebanese institutions over the current economic situation. On the political side, five months after his appointment, the Prime Minister designated Saad al-Hariri hasn’t succeeded yet in forming a new government, giving space to mutual accusations with Hezbollah and President Michel Aoun. Against this institutional and political deadlock, the country is still struggling with skyrocketing Covid-19 infections, while the limited vaccination campaign took off to a bumpy start amidst investigations of suspected favoritism. On the international front, several countries (e.g., France and Qatar) announced their availability to assist Lebanon in its economic recovery, although only once a new executive is formed.

Experts from the ISPI MED network react to the ongoing crisis in Lebanon.

No economic recovery without solid institutions

“The recent financial and economic meltdown in Lebanon is the outcome of 30 years of social, economic, financial and fiscal mismanagement, amplified by the COVID-19 pandemic, and further exacerbated by the Beirut Port explosion. Over the past few years, Lebanese citizens’ trust and the international community’s trust in the government have unfortunately been eroded. Consequently, Lebanon’s sole option today is to rebuild confidence in the government and the public institutions by embarking on major economic reforms as part of a comprehensive macroeconomic stabilization and economic recovery plan that has the support of all key stakeholders. Concurrently the government should seek an IMF program that will pave the way for additional financing from other international sources.”

Civil society and external donors: the essential requirement for a Lebanese reform process

“The current crises starkly expose the deep failure and unsustainability of current governance and developmental mechanisms in Lebanon. Faced with resilient, sticky systems that feature many veto players, reform is inevitably bound to be a gradual, long-term process that slowly and painfully strengthens and changes political structure. For this reason, a strong partnership between external donors and Lebanese civil society needs to be created to support a bottom-up reform process. Meaningful reform will require heavy external conditioning to erode the stranglehold of sectarian elites over the state. This will only be effective if there is strong popular support for such conditions and a dedicated, inclusive civil society more attuned to local realities.”

“Lebanon’s recent vaccine-scandal placed the World Bank-funded program at risk. That this occurred in the midst of a global pandemic and Lebanon’s existing financial crisis is further evidence of the endemic corruption in the Lebanese political system. Although the World Bank has expressed its dismay at the irresponsible behavior of Lebanese politicians, it is unlikely to block Lebanon from receiving additional vaccine doses. However, these actions raise questions about Lebanon’s ability to deliver vaccines to the country’s most vulnerable populations, especially refugees, which comprise over 20 percent of the population. It is imperative that the World Bank and World Health Organization hold Lebanon accountable to ensure that the vaccine program is open and transparent.”

“Hezbollah’s constituency remains loyal, albeit not uncritical towards the party. The economic-financial crisis has exacerbated discontent among Hezbollah’s supporters. The party has had to freeze a number of services it used to provide to its constituents. But what is particularly challenging for Hezbollah is the extraordinary visibility of the inequality gap among different social groups of its base. Its poorest supporters, who are suffering the most, may be ready to accept that this situation is due to the ongoing crisis, combined with US sanctions against Iran and Hezbollah, but are definitely not ready to accept the uneven distribution of wealth among the party’s base. Hezbollah cannot blame external enemies for this situation. However, such pressure renders all the more vital for Hezbollah to obtain some relief from US sanctions. This will depend greatly on whether the Biden administration will reopen a diplomatic channel with Iran. If that happens, we might expect more financial resources to flow from Iran into Lebanon to help Hezbollah restore at least part of its traditional welfare machine–the engine of its popular support.”

The EU should invest in Lebanon’s civil society

“Partisan interests and unwillingness to implement meaningful reforms, are the main reasons behind the delay in forming a new government. The consequences of the current impasse are likely to be Lebanon’s further spiralling into crisis, especially economic and health ones, and a growth in protests.

Against this backdrop, the EU should stick to its position of making funding conditional on substantial reform, but at the same time it should expand urgent humanitarian aid and continue working with civil society, helping creating platforms for civic organizations and grassroots political initiatives as well as expanding on the existent ones.”

“The international community should apply strict principles of accountability to any substantial financial support for Lebanese public institutions. In parallel, Lebanon’s external partners should provide direct support to sustain the livelihood of Lebanese citizens and refugees and keep competitive private enterprises in business. The majority of Lebanese holds no trust for the domestic political elite and will therefore welcome foreign guidance and pressure towards reform, provided this is not seen as picking sides in controversial political issues related to the domestic balance of power or Lebanon’s positioning in regional politics.” 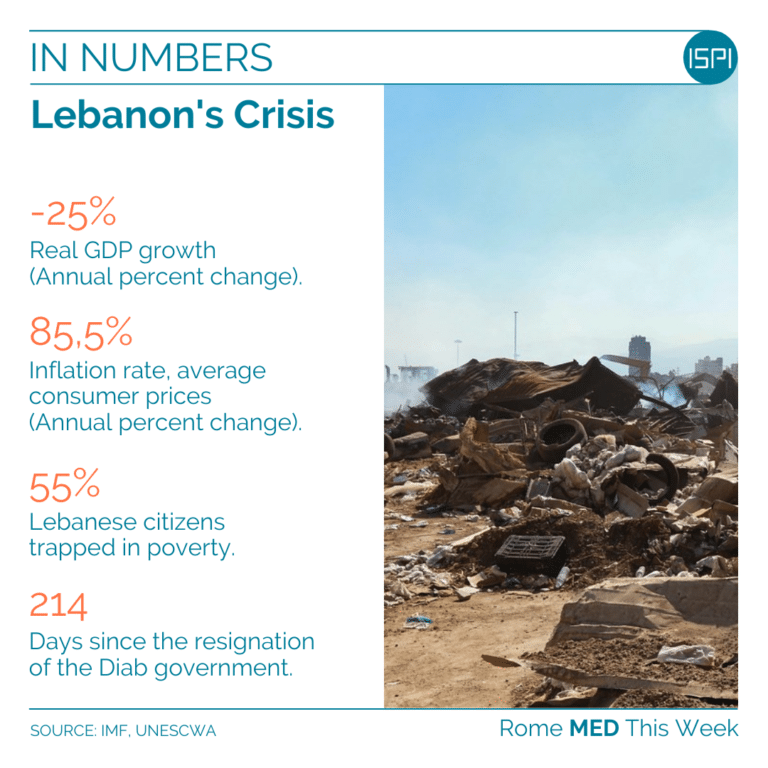