The MED This Week newsletter provides expert analysis and informed insights on the most significant developments in the MENA region, bringing together unique opinions on the topic and reliable foresight on future scenarios. Today we turn the spotlight on Iran, focusing on the regime’s violent repression of the protest movement and the country’s increasing international isolation.

Four months after the outburst of country-wide protests, the Iranian regime is doubling down on its violent repression of the movement and its quest for their greater civic liberties. The government has just appointed a new police chief and has intensified punishments for women who violate the country’s strict dress code. Also, protesters are now being sentenced to death through allegedly hasty trials. Domestically, this crisis has implications also for the economy, which has been suffering from the consequences of prolonged instability and violence. Importantly, however, it will also have implications for the Iran’s external relations. At the regional level, the protests have prompted Tehran to maintain a more cautious stance on its foreign policy. On the global stage, as internal repression grows, Iran’s involvement in Russia’s war against Ukraine is irritating European countries and the US.As a consequence of this situation, the country is embarking on a dangerous path towards international marginalisation, including a harder sanctions regime and possibly the end of any further hope to revive a multilateral nuclear deal.

The experts of the ISPI MED network react to Iran’s ongoing political instability. 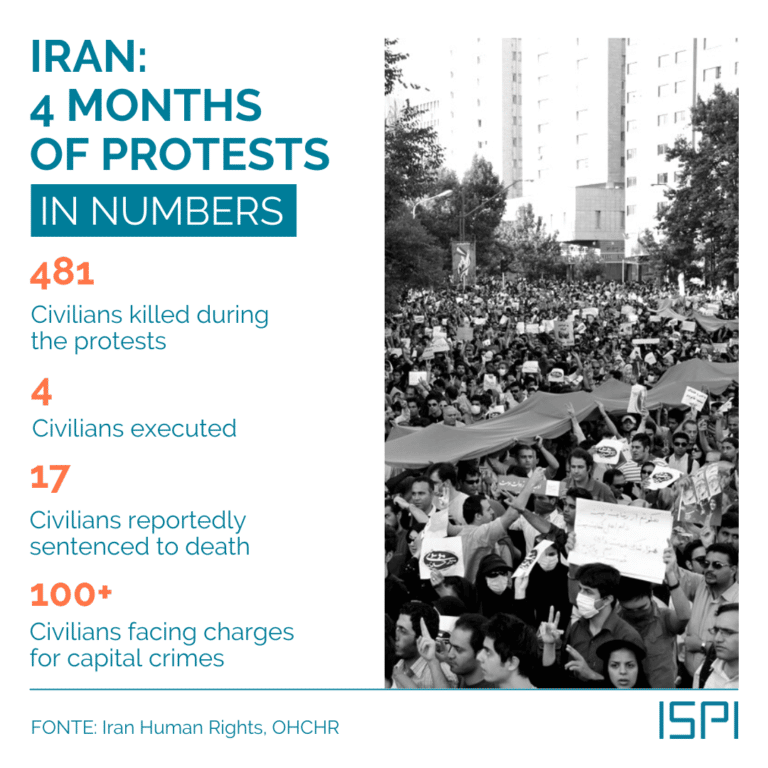 Four months into the protests, the regime’s strategy is to escalate

Four months after the start of a popular uprising in Iran, the regime continues to respond to public frustration with unreserved and brutal violence. So far, hundreds of people have been killed during the protests, thousands have been imprisoned, several have been placed upon death row, and four young men have been executed for participating in the protests. Despite the violent crackdowns, there are still daily protests spanning across the country. These protests vary in sizes and location, but they all are united in their demand, that is to topple the ruthless regime. Iranians in diaspora have been calling upon leaders of the democratic world to end their diplomatic relations with the regime, by recalling their ambassadors back to their respective capitals, and list the Islamic Revolutionary Corps (IRGC) as a terrorist organisation. The UK and the EU have indicated their support for listing of the IRGC as a terrorist organisation, which will be of high significance for both the regime and the protesters. Greater international pressure will likely further encourage the protesters, thus weakening the regime. The violent and oppressive measures put in place by the regime, however, will remain unchanged, if not further escalated.

The protests are impacting the economy, too

The ongoing political turmoil within Iran, and the reality that a secondary wave of sanctions will remain in place, is starting to have an impact upon Iran’s economy. Purchasing manager’s index data reveals that Iran’s economy is slipping into a contraction, mainly owing to weak demand in the services sector. Firms and households are increasingly pessimistic about the economic outlook, and this is leading to a change in their behaviour. Firms are continuing to cut back on investment, and households are cutting back on already diminished spending. The further devaluation of the Iranian Rial, which has recently reached historic new lows, reflects this worsening sentiment. Importantly, the government is failing to reassure firms and consumers. The sacking of Iran’s central bank governor earlier this month was indeed supposed to signal that order will return to the markets, however it had the effect of indicating a lack of leadership and direction in economic policymaking.

It goes without saying, Iran’s domestic crisis is impacting on the country’s external relations. The regime’s violent repression of manifestations – recently compounded by the intolerable wave of executions – will drive the ‘Islamic’ Republic further and further away from both the EU and the US. This is even more so as Teheran, while crushing its population’s legitimate quest for greater civic liberties, is providing Russia with drones and missiles that are currently destroying Ukraine’s electric infrastructures, as well as technical support to Russian troops operating within Crimea. A collaboration that is earning Iran the lonely title of the only country – alongside North Korea – to be actively sponsoring the invasion of a sovereign European state. As such, the regime’s brutal reaction to protests will only drive Teheran further and further away from any hopes to revive the nuclear deal, which in fact is considered close-to-death by American diplomats.

Iran’s increased diplomatic isolation in the international arena makes resuming dialogue with Riyadh, primarily, an imperative for Tehran to avoid further regional isolation, despite perceiving a malign Saudi role in stirring local protests. As a consequence, Riyadh has gained some leverage and sees less of an imperative to engage in dialogue immediately, perceiving value in delays in hope Tehran will face further isolation and internal instability. On the other hand, Iran will benefit from an increasingly friendly government in Baghdad that may still be able to facilitate regional dialogue such as its predecessor. Iran also benefits from Egypt’s recent openness and Jordan’s concerns about a Russian withdrawal from Syria that could further Iran’s influence, making those two Riyadh-allied countries potential interlocutors. Tehran hopes to use regional dialogue to convey a positive message to western countries. Also, Tehran still occasionally signals using coercive measures against Gulf Arab countries as a means of deterrence, all be it in a slightly more cautious manor, at this stage at least.