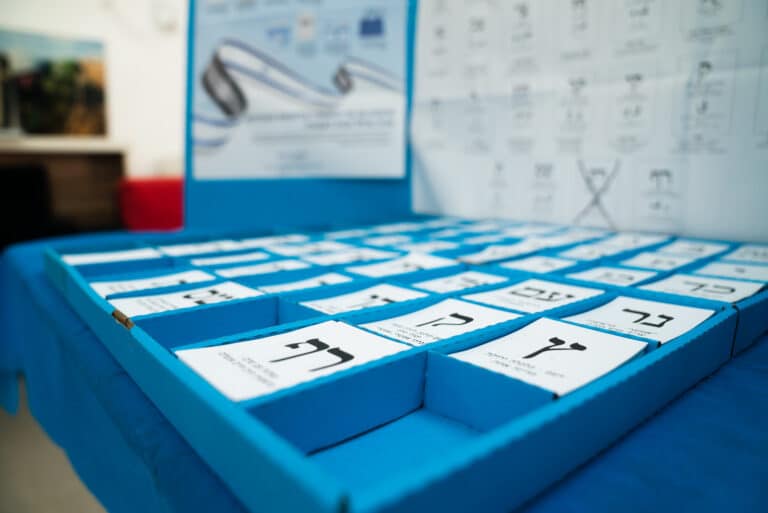 The MED This Week newsletter provides expert analysis and informed comments on the MENA region’s most significant issues and trends. Today, we focus on Israel, where the upcoming elections have been shaped once again by the polarisation around the figure of former PM Benjamin Netanyahu.

On November the 1st, Israelis will head to the polls for the fifth time in less than four years. As the previous ones, this electoral campaign too has been shaped by the polarization around the figure of former Prime Minister Benjamin Netanyahu. His main opponent, current PM Yair Lapid, has scored a few political goals in the past few months, but is still lagging behind in the election polls. Coming amidst a cost of living crisis and a new wave of violence in the West Bank, this election might also signal the rise of the far-right party “Religious Zionism”, which is capitalizing on the support of many Israelis, especially among the youths. In this context, even though Arab voters may hold the key to the election, the sense of disillusion they feel towards national politics, along with the fragmentation of Arab parties, might lead to a low turnout within the community. While the race is still on, it is unclear how far this election will be decisive in pulling Israel out of the political deadlock it has been floating in for years.

Experts from the ISPI MED network focus on the upcoming Israeli elections, the fifth in less than four years. 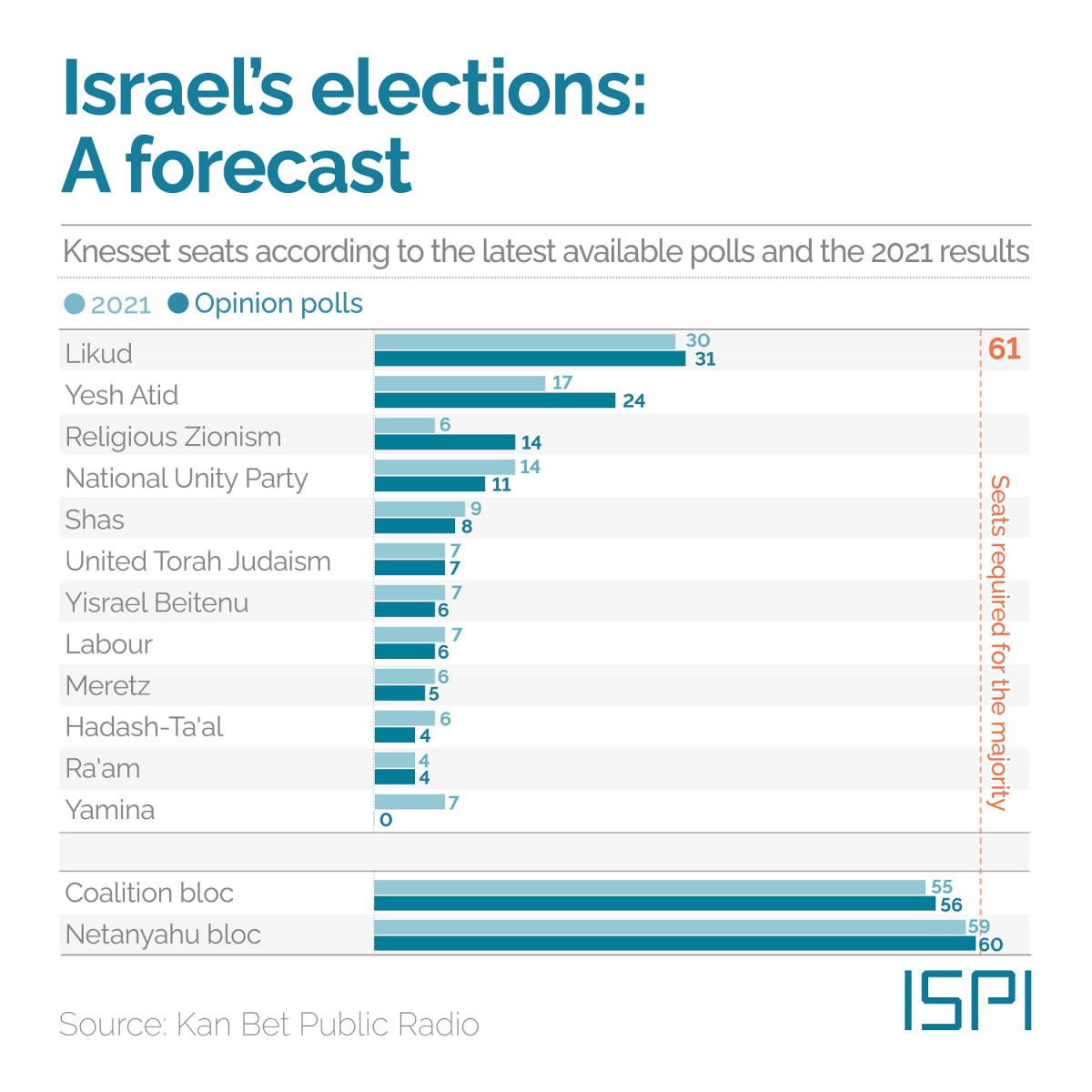 The economy will be an important, yet not decisive, factor in determining electoral results

Israelis care about the high cost of living. A plurality of them even ranks this as the top issue according to which they will vote. In practice, however, electoral behaviour seems to be dictated by other factors. Going to the polls four consecutive times recently, most Israelis already intuitively know who they support; moreover, the main political focus has become a personal one – whether Netanyahu should be prime minister or not. Policy differences, including on economic issues, are more easily set aside in light of this. In addition, security-related developments traditionally have more impact on Israeli electoral outcomes than economic ones. Promises made by Netanyahu’s campaign to reduce the cost of living were not effective, as many doubt their sincerity, given his track record. On the other hand, Lapid highlights his government’s effective handling of economic issues, while emphasizing economic benefits of his foreign policy successes – the maritime deal with Lebanon, the Negev Forum, the normalisation with Turkey, and the reconvening of the Israel-EU Association Council. This helped Yesh Atid gradually grow in the polls. But, beyond economy the sense of urgency that many Israelis feel this time is about saving their country from a rising nationalist and anti-democratic far-right, and from the return to power of a corrupt candidate.

The Israeli electorate is quite stable in its split between the pro- and anti-Netanyahu blocks. The only voters that are somewhat undecided are to be found in the center right, but their amount is limited. Against this backdrop, Likud’s primary goal is to get back to the polls those citizens who previously voted for the Likud but abstained in recent elections. There was especially a massive effort in door-to-door campaigns and public appearances. In addition, the Likud might have prepared for last minute efforts on Election Day.

The chances that Netanyahu can return as Prime Minister are given, but it is all but a done deal. Current polls give the parties of the Netanyahu block sometimes more, sometimes less than 50% of the votes. Three scenarios seem likely: 1) Netanyahu will form a pure right winged coalition including the extremist Religious Zionist Party; 2) One of the center parties (or parts of them) will break their promises and support Netanyahu; 3) New elections due to a continuing political paralysis. That would leave Lapid in place as caretaker Prime Minister.

Lapid might have scored a few political goals, but his road is uphill

Yair Lapid joined significantly late this electoral competition, which makes the fifth contest in less than four years. He scored two significant achievements in the security field. Firstly, he reached the maritime border agreement with Lebanon and, secondly, he appointed the new chief of staff of the Israeli Defense Forces. Security and economy are two essential dossiers in Israel, above all in an electoral atmosphere. The maritime agreement with Lebanon brings security on gas fields, and therefore economic development. Lapid bet on a sense of ‘electoral fatigue’ of the Israeli voters, after so many useless political contests in such a few years. Yair Lapid also showed a sort of political bravery last September at the UN General assembly, when he proposed the resumption of negotiations with the Palestinian Authority. At the same time, he made an unwritten, incomplete but significant agreement with Hamas: security for Israel in return for economic growth in Gaza. This is something unpopular in Israel for a public opinion leaning to the right. Since quite a long time, hardly the question of Palestine is a matter of debate in electoral campaigns. So, would Lapid be able to form a new government? Would someone else be? The November 1st contest could just pave the way for another election.

The growing popularity of Israel’s far-right is not surprising

According to the polls, Ben Gvir and the extremist nationalist alliance he co-heads is expected to become the third or fourth largest party in Israel’s parliament. That’s double the size of Israel’s founding liberal Labor Party, which once dominated Israeli politics and led the country to sign the Oslo Accords.

The growing popularity of the religious far-right is not surprising. It is a product of years of nationalist education that promotes Jewish supremacy and anti-Arab sentiments, together with over a decade of right-wing governments led by Benjamin Netanyahu, that have incited the public opinion against Palestinians and Israeli human rights organizations. The majority of Israelis today are right wing, with the rate especially high among the youths. In the March 2021 election, Netanyahu legitimised the Jewish extremist parties in order to survive politically. That, together with the riots and violence in several Arab-Jewish cities in May 2021 that left many Jewish citizens feeling vulnerable and fearful of their Palestinian neighbors, has led many to turn to the hard right.

Arab voters and parties are facing two main challenges ahead of the elections. First, they need to pass the electoral threshold to enter the Knesset. This challenge is not an easy one. There has been a significant increase in the proportion of Arabs with the right to vote who do not actually intend to exercise such a right due to their disappointment with the Arab leadership in the Knesset and the experience of the change government. In the meantime, Arab parties are mobilizing, but estimates foresee that the voter turnout will probably be around 44-46%. This means that there is a risk of one or two Arab parties not passing the threshold. The struggle between them suggests that passing it is one goal; doing so at the expense of other lists might be the hidden one. The second challenge Arab voters and parties are facing is to avert the possibility (which seems realistic) of a far-right government of former PM Benjamin Netanyahu, the fundamentalist ultra-Orthodox parties and the religious Zionist party of Smotritz and Ben Gvir. Together, they pose a threat to Israel’s democracy and the Arab minority.

Even if not at the centre of the debate, the Palestinian issue still shapes politics in Israel

The Palestinian conflict has been conspicuously absent from the Israeli electoral campaign. Prime Minister Yair Lapid’s call at the United Nations for two states for two people has not reverberated with the electorate, reflecting the low support and priority that the Israeli public accords to this issue. But Palestinians have featured in other ways. Ra’am, an Islamist Palestinian party, could play the role of king maker by giving a majority to a future governing coalition in return for increased funding for Israel’s deprived Bedouin communities. Conversely, a low voter turnout amongst Palestinian citizens of Israel could hand victory to a right-wing coalition under Benyamin Netanyahu. Meanwhile, far right politicians such as Itamar Ben-Gvir are successfully capitalising on Israel’s right-ward shift by joining extremist Israeli settlers in their campaign of violence and dispossession against Palestinians in East Jerusalem and the West Bank. As clashes escalate in the occupied territories, Palestinians will continue to shape the outcome of next week’s election.