Med This Week | The Sadrist Gamble: A Make-or-Break Moment for Iraq?

The MED This Week newsletter provides expert analysis and informed comments upon the MENA region’s most significant issues and trends. Today we place the spotlight upon Iraq, where an extended political crisis has abruptly resulted in the occupation of the Iraqi parliament by the supporters of the influential leader Muqtada al-Sadr, and a potential confrontation between different Shia factions.

The Iraqi political crisis has reached a new peak. Since July the 30th, the Parliament has been taken hostage by supporters of the Shia cleric Muqtada Al-Sadr. During their sit-in occupation within the Baghdad Green Zone, pro-al-Sadr demonstrators called for the dissolution of the Parliament (which they had stormed three days earlier), new elections and reforms. These recent developments are just the latest episode of Iraq’s most prolonged political deadlock. In the aftermath of the October 2021 elections, the Sadrists emerged as the Parliament’s largest bloc, but they have been unable to muster enough support to form an executive that would exclude Al-Sadr’s Shia rival, the former prime minister Nouri al-Maliki. After months of political paralysis, in June this year Al-Sadr had already ordered his parliamentarians to exit the legislature, leaving the “Coordination Framework” to form a government. With his latest move, he is further tilting the country’s political transition towards unknown territory. In response to the Sadrists’ actions in Parliament, Shia rivals within the Coordination Framework staged counter-demonstrations, rapidly heightening the prospect of mounting tensions in Baghdad. Despite some tentative signs of a de-escalation (such as Al-Sadr’s call for his followers to withdraw from the Parliament building, but not the surrounding area), rivals in the streets are still far from disbanding the protests. Beyond Shia rivalries, most Iraqi parties (both Sunni and Kurdish), as well as paramilitary units belonging to the Popular Mobilization Forces, abstained from taking sides, limiting themselves to call for a return of dialogue. Tehran is also looking at events in the neighbouring country with increasing concern, as escalating tensions within the “Shia house” do not directly play into the basket of Iran’s long-standing interests in Iraq.

Experts from the ISPI MED network react to the current political crisis within Iraq in the aftermath of the Sadrists occupation of Parliament. 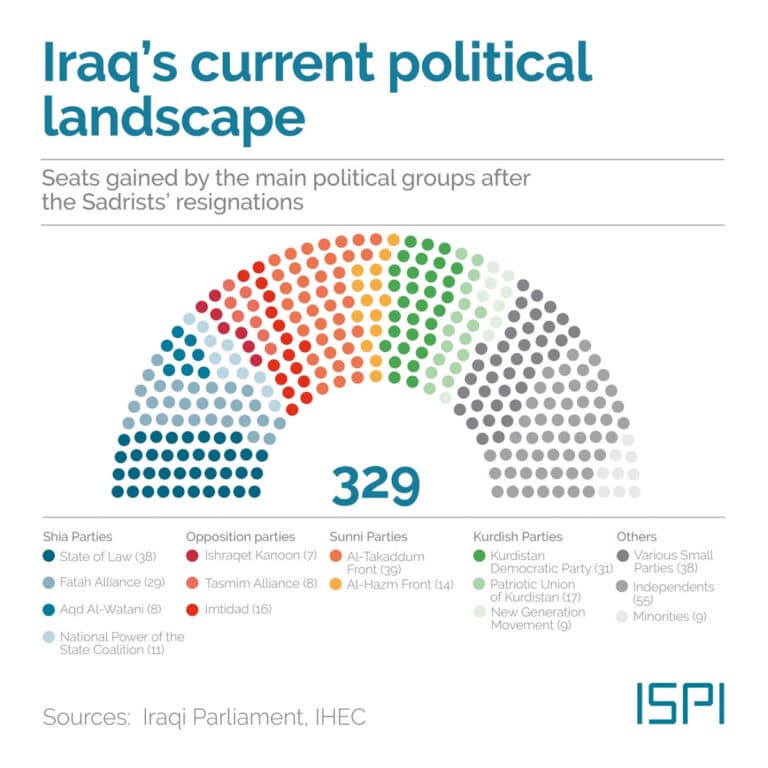 “Muqtada Al-Sadr’s ultimate objective is to be recognized as the most powerful Shia leader in Iraq. He has sought out different ways to achieve this. Firstly, through his attempt to create a majority government while sidelining his rival, Nouri Al-Maliki, into opposition. Having failed to attain this, he then turned to protest politics to threaten the entire political system’s tenure, counting on public anger to propel his movement forward, and reinvent himself as a man of the people rather than a politician complicit in the very corruption he supposedly seeks to root out. Sadr has placed Iraq in a dangerous and unstable position where the worst-case scenario is an intra-Shia civil war, and the best-case scenario is a government built upon concessions to the Sadrist Movement. The latter may be achieved through either dialogue based on the existing pool of candidates or possible early elections with a new electoral law – which is what the Sadrists are calling for. The former may be mediated by the intervention of Grand Ayatollah Sistani. Either way, Iraq is at a dangerous precipice.”

No political monopoly in the Shia camp

“There are many different influential political leaders within the Coordination Framework (CF). Some are calling for dialogue, while others are pushing for confrontation. For example, Prime Minister Haider Al-Abadi has offered to mediate between his colleagues in the CF and Sadrist Movement. Hadi Al-Ameri, head of the Badr Organization, has also called for political dialogue in exchange for the Sadrist protestors to withdraw from the International Zone. Conversely, Nouri Al-Maliki has demonstrated a preference for confrontation. Even Qais Al-Khazali, who has been described as confrontational, issued a statement promoting dialogue and calm. In general, the calls for dialogue have been stronger, and this is a relief, as most of Iraq’s political parties are armed, and any confrontation could quickly escalate into violence. These differing calls for calm and dialogue show that the CF has various political leaders with similar authority and that they are not directed by State of Law’s Nouri Al-Maliki alone. The CF has stood together in the face of Sadr’s attempts to split them apart from Maliki, but Maliki does not lead them. They are united by their desire to not see Muqtada Al-Sadr, or any one political leader, monopolize Shia politics.”

Erbil is open for mediation (and to contain spillovers)

“The Kurdistan Regional Government (KRG) is playing a constructive role by inviting Sadr and his rivals within the Shia Coordination Framework to Erbil for peace talks. This forms part of a long-standing and historical pattern of Kurdish interventions designed to mediate conflicts within the Shia political class. Mediation efforts are being led by the Kurdistan Democratic Party (KDP) and have the full support of the Patriotic Union of Kurdistan (PUK). The two parties rule Kurdistan as part of a coalition government and have had significant differences during the government formation process. Still, both parties recognize the limits of their influence over the implosion unfolding in Baghdad, which is an intra-Shia battle for control of the Iraqi state. The KDP and PUK have to play a balancing act between contesting the political environment at home and the imperative of ensuring that turmoil and civil war in Baghdad do not upend Kurdistan’s political order.”

“The current round of confrontation between the followers of cleric Muqtada al-Sadr and those of the Shia Coordination Framework (CF) further exacerbates the institutional cleavages between Sadrist brigades and the dominant Iran-allied brigades within the Popular Mobilization Forces (PMF). However, the Iran-allied command that controls the PMF’s higher echelons has been keen on displaying an image of PMF neutrality amidst Sadrist protests and CF counter-protests. The PMF media directorate reported that Prime Minister Mustafa al-Kadhimi ordered the PMF’s security directorate to become a buffer between CF protesters and the Green Zone security forces. Moreover, the PMF has been reporting without interruption upon its anti-Islamic State group counterinsurgency operations throughout Iraq. The organisation wants to prove that it remains insulated from ever-increasing political discords. In reality, projecting an image of PMF neutrality may not convince Iraqi societal segments who oppose the CF. Finally, the PMF will very likely become a party that clashes if armed conflict erupts between Sadrists and the CF, because the current battle targets delegitimizing Iran-allied paramilitary groups that run the PMF.”

“The ongoing political crisis within Iraq poses significant challenges to Iran’s interests. On the one hand, Tehran is worried that the growing confrontation between the Sadrists and the Shia Coordination Framework (CF) may turn into an intra-Shia conflict in Iraq. This runs counter to the Islamic Republic’s longstanding desire to foster a unified Shia bloc in Iraq as an active part of the “axis of resistance.” On the other hand, these recent developments could lead to an increase in the power and influence of Iraq’s Sunni and Kurdish factions. This, in turn, would provide an opportunity for Iran’s regional rivals, especially Turkey and Saudi Arabia, to expand their influence to Tehran’s detriment. Currently, Iran’s approach is based upon trying to maintain the coherence of the CF and prevent its disintegration. At the same time, the Iranian leaders are aware that any direct intervention in the crisis will only increase anti-Iran sentiments, further complicating the situation.”

The longer the impasse lasts, the deeper Iraq’s problems will take root

“The current political stalemate is effectively deflecting attention from the long-term challenges Iraq has to face, such as the repercussions of the Ukrainian war upon its economy. The country imports approximately 50% of its food requirements, and while not directly dependent upon Russian or Ukrainian imports, it has suffered from soaring global food prices. At a time when skyrocketing crude prices have boosted national oil revenues to record highs, the lack of budget for the fiscal year 2022 is similarly hampering the state’s capacity to invest in much-needed infrastructure projects and economic reforms to address the citizens’ needs. Meanwhile, Iraqi people suffer from dire public services, power and water cuts, high poverty and widespread unemployment. As Iraq’s political paralysis persists, many observers expect public dissatisfaction to rise dramatically due to the country’s worsening socio-economic conditions, the aggravating consequences of climate change and the political elite’s inability to address other similar challenges. Currently, Iraq has been without an executive for over nine months. Now that it is becoming increasingly clear that urgent political measures are more than necessary, how the Iraqi political class will respond remains to be seen.”