A year into the pandemic, the Middle East and North Africa region faces mixed prospects on vaccine rollout. The ability to carry out mass Covid-19 vaccination campaigns varies extensively among countries, many of which are indeed struggling to secure an adequate vaccine supply. Among wealthier states, Israel represents the world’s top-nation for vaccine administration, while Gulf countries are well-placed to act as a regional hub for vaccine distribution. On the other hand, fragile states are not as well equipped and must rely on international support. The Palestinian territories, for instance, suffer from a lack of doses that is partly tied to Israel’s recent restrictions. In this complicated endeavor, middle-income economies are looking for ad hoc solutions. In North Africa, Morocco and Egypt are trying to launch domestic vaccine manufacturing while highly sanctioned Iran balances self-capability with external assistance.

Experts from the ISPI MED network react to the new struggles emerging in the vaccine campaigns in the MENA region.

“Israel depicts itself as an ‘island’ that can easily close its borders to contain external contagion, yet this does not take into account the 130 thousand Palestinian laborers who travel from the West Bank into Israel, or the half-million Israeli citizen who reside in settlements. As long as there is constant travel, Israel cannot successfully prevent cross-contagion. Hence Israel has a public health interest that the Palestinians inoculation project will not lag behind. The same applies to Israeli communities with low vaccination rates, such as the ultra-Orthodox. Israel will not be able to return to normalcy or eradicate the virus until they are also vaccinated, and cases will persist despite the closed borders.”

In Palestine, Israel is losing another opportunity

“‘Let them take care of themselves’ was the Knesset’s answer to the vaccines to Gaza. In a matter of hours, 2.000 doses of Sputnik were donated by Russia and provided by the Palestinian Authority. Israel lost moral and political opportunity. Putin’s Russia has now one more chance to extend its role both in the region and in the Israeli-Palestinian confrontation. According to the latest WHO’s report, the cases of Covid-19 in Gaza are 54.042; 2.169 actives, 538 losses. The pandemic is not spreading at the same speed as Israel: Gaza is a cage at the end of the day. But hardly the international community will forget the Israeli behaviour.”

Iran’s vaccination campaign is a reflection of its foreign policy

“Iran’s approach toward COVID-19 vaccination is a clear reflection of its foreign policy: pessimism toward the West, look to the East, and at the same time, trying to become self-reliant by working on domestic capabilities. Iran is a good example of how long-term trends in foreign policy – in this case, a longstanding confrontation with the West – may politicize the usually non-political aspects of life in a country. At the same time, the potential success of the Russian vaccine could provide Moscow with an important element of soft power in Iran – something it has lacked so far. This would maintain “look to the East” as the basis of Iran’s foreign policy for the foreseeable future.”

The Gulf as a logistical hub for vaccines in the region

“In the GCC, the handling of the COVID pandemic has been highly revealing of broader domestic priorities and geopolitical trends. The pandemic has become a national security issue, and its management, a matter of regime stability and of regional influence. Rather than joining forces to confront the pandemic, GCC countries have mainly competed against each other to secure rapid supply of medical equipment and vaccines. Some of them have also taken the COVID pandemic as an opportunity to project influence and gain geopolitical capital. The UAE especially, has been particularly efficient at positioning itself as a regional logistical hub, partnering with the WHO on global vaccine distribution, cooperating on vaccine trials and now manufacturing with China’s Sinopharm. Even within the UAE, competitive dynamics prevail, with Dubai and Abu Dhabi launching competing logistical alliances for vaccine distribution. But beyond the regional arena, the presence of Chinese and Russian vaccines in the Gulf reflect wider debates about the changing security role of traditional Western allies in the Gulf.”

North Africa is looking to the East

“The UAE is indigenizing manufacturing capacity of the Sinopharm, Sputnik V, and Astrazeneca vaccines in the coming year and hoping to distribute them through its local logistics network to existing trade partners in developing African countries. Morocco and Egypt also plan to indigenize Sinopharm vaccine production, but lack the state-backed financial resources and trade partnerships of the UAE. Morocco’s pharmaceutical supply chains have already experienced problems distributing between depots and health facilities, lacking necessary IT to manage procurement processes. Further, Sinopharm vaccines have slow production time when compared to competitors. While these nations may not be actively coordinating with each other now, more fora should emerge on exchanging manufacturing lessons learned as each nation scales up its African vaccine distribution.” 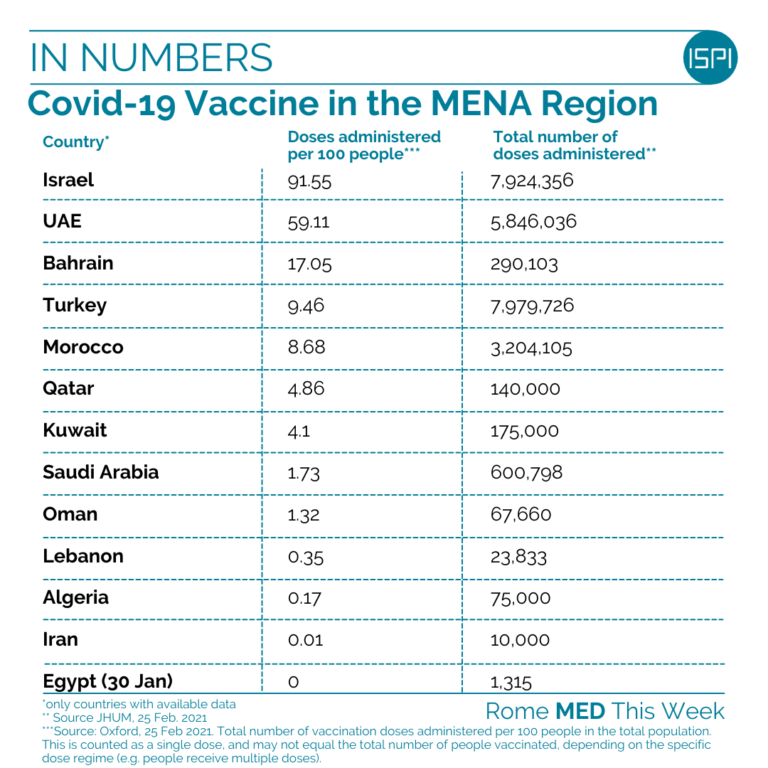