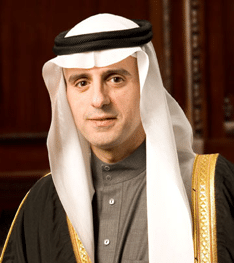 H.E Adel Bin Ahmed Al-Jubeir has been the Minister of State for Foreign Affairs of Saudi Arabia since December 2018.  He started his career in 1987, appointed to the Saudi Diplomatic Service and posted to the Royal Embassy of Saudi Arabia in Washington DC. From 1990 to 1991 he was part of the Saudi team that established the Joint Information Bureau at Dhahran during Operation Desert Shield/Desert Storm. In October 1991, he was a member of the GCC delegation to the Madrid Peace Conference and in 1992 of the Saudi delegation to the Multilateral Arms Control Talks in Washington. From 1994 to 1995 he has been Visiting Diplomatic Fellow, Council of Foreign Relations, New York. In 2000, he became the Director of the Saudi Information and Congressional Affairs office in Washington. From 2000, he has been Foreign Affairs Adviser in the Crown Prince’s Court and later Adviser at the Royal Court. From 2007 to 2015, he has been Ambassador to the United States. In April 2015, he was appointed as foreign minister up to December 2018.