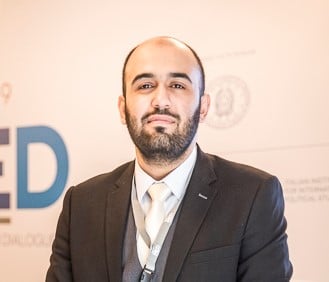 Ahmad Bassam Hilmi Ibrahim from Jordan studied electrical engineering at the University of Jordan. through his studies, he has done multiple internships with MIT Media Lab, Techworks (Digital Fabrication Lab), JREEEF (Jordan renewable energy efficiency fund).
Been a scholarship apprentice in programs like google cloud architecture scholarship program and young changemaker scholarship program in the Università Della Svizzera Italiana.
At MIT Media Lab research group and they were interested in helping refugees and holding the social responsibility to improve education and healthcare. and from that I started a project which turned into a startup called DoctorX Which main goal is to help refugees to keep their medical records for them and their loved ones in multiple languages which I noticed as a big challenge to medical team whenever they where trying to help refugees or to be in a position to treat them if something was wrong with them.
Has worked for serval years in voluntary communities like IEEE Jordan section and Showman foundation. In early 2017 co-founded the Power and Energy Chapter in the University of Jordan which has pioneered different projects in Jordan that were reaching out for rural areas to educate them about Energy as well as installing renewable energy systems for such schools.