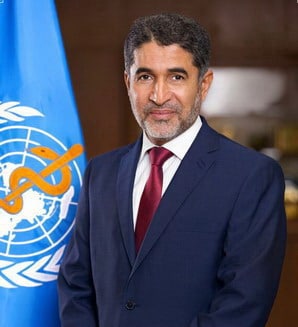 Dr Ahmed Al-Mandhari from Oman was appointed as WHO Regional Director for the Eastern Mediterranean by WHO’s Executive Board at its 143rd session and assumed office on 1 June 2018. A specialist in family and community medicine, Dr Al-Mandhari was Head of Quality Management and Development at Sultan Qaboos University Hospital from 2005 to 2006, followed by Deputy Director-General for Clinical Affairs until 2010. In 2013, he was appointed Director-General of Sultan Qaboos University Hospital, later becoming Director-General of the Quality Assurance Centre at the Ministry of Health. Dr Al-Mandhari has also worked as a senior consultant in family medicine and public health in Oman since 2009. He holds a Postdoctoral degree from the Liverpool School of Tropical Medicine, as well as a Diploma in Tropical Medicine and Hygiene from the University of Liverpool.