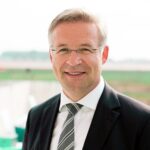 Dr. Andreas Schwer is the CEO of Saudi Arabian Military Industries ‎‎(SAMI). Prior to joining SAMI, Dr. Schwer was a member of the Executive Management Board of Rheinmetall Defense. Amongst his duties, he was President and CEO of Combat Systems Division. Dr. Schwer then served as the Chairman and President of Rheinmetall ‎International AG where he was responsible for defining the company’s internationalization strategy. In 2008, Dr. Schwer served as ‎Executive Vice President of Global Engineering and Innovation at The Manitowoc Company, ‎Inc. He was also appointed as the General Manager of the company’s branch in Germany. Dr. Schwer began his career with Airbus Group Inc., where he held a number of leadership positions within their defense & space branch. Amongst those, he was one of the key industrial enabler of the Galileo Satellite Navigation Program founded by the European Union and the European Space Agency. ‎