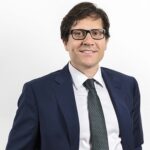 Born in Naples (Italy) in 1970, Antonio Cammisecra graduated cum laude in Mechanical Engineering from the University of Naples “Federico II” in 1996. In 2004 he obtained Executive MBA from Bocconi University.
He joined the International Department of Enel Group in 1999. He then spent some years as Business Development Manager in Latin America, working in several countries of Central America (Mexico, Guatemala, Costa Rica, El Salvador, Nicaragua, Panama) and South America (Brazil, Chile). In 2009 he was appointed Head of Business Development Italy for Enel Green Power, later in 2012 Head of Operations and Maintenance Italy Hydro, Wind & Solar. In 2013, he became Head of Global Business Development, leading a team of more than 200 people, working in over 20 countries across 5 continents. In May 2017, he was appointed Chief Executive Officer of Enel Green Power, Head of North and Central America and Head of Africa, Asia and Oceania. Moreover, he was designated President of Res4Africa. The company is fully committed to energy production from renewable energy sources and it is recognized as one of the best positioned and more successful operator in the renewable energy sector at the worldwide level.