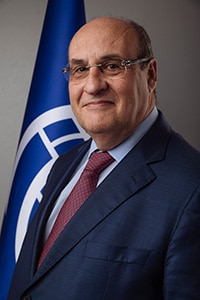 António Vitorino was appointed Director General of the International Organization for Migration in 2018. Mr. Vitorino, succeeded the United States’ William Lacy Swing, who served two five-year terms as Director General. He is a former European Commissioner for Justice and Home Affairs (1999-2004) and former Minister of the Presidency and National Defence (1995-1997). He has also enjoyed a distinguished career in Portugal as a lawyer as well as in electoral politics. He was elected to Portugal’s Parliament in 1980. In 1983 he became Secretary of State for Parliamentary Affairs. He later served as Deputy Secretary for the Governor of Macau until 1989, when he returned to Lisbon to become a judge of the Constitutional Court, a term that ended in 1994. He subsequently served as Minister for National Defence and Deputy Prime Minister within the government of António Guterres, now the United Nations’ Secretary General.