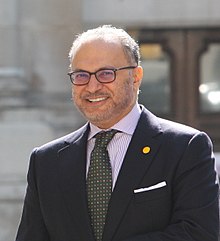 Anwar Gargash is an Emirati politician who was elected as Minister of State for Foreign Affairs for the United Arab Emirates (UAE) in 2008. Gargash started his career as a faculty member at United Arab Emirates University where he served from 1985 to 1995. From 1995 to 1999, he worked as Managing Editor of the Strategic Studies publication by the Emirates Center for Strategic Studies and Research (ECSSR), and from 1995 to 2006 as Chief Executive Officer of Gargash Enterprise. Between August 2006 and February 2007, Gargash served as Chairman of the National Election Committee. He was appointed Minister of State for the Federal National Council in 2006. Gargash received a bachelor’s degree in 1981 and a master’s degree in 1984 in political science from George Washington University. He then obtained a PhD from King’s College of Cambridge University in 1990.