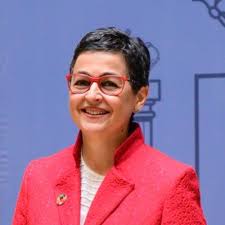 Minister of Foreign Affairs, Spain (Until 2021)

Arancha González Laya is a Spanish lawyer and the current minister of Foreign Affairs European Union and Cooperation in the Spanish government of Prime Minister Pedro Sánchez. Prior to this appointment she served as the assistant Secretary-General of the United Nations and the Executive Director of the International Trade Centre, a joint agency of the United Nations and the World Trade Organization. She was appointed to this position in August 2013 and until January 2020. González began her career in the private sector as an associate at German law firm Bruckhaus Westrick Stegemann advising companies on trade, competition, and state aid matters. Between 2002 and 2005 González was the European Commission’s spokeswoman for trade and adviser to the European Commissioner for Trade Pascal Lamy. She also served as Chief of Staff to Pascal Lamy in her role as WTO Director General between 2005 and 2013 and was the WTO Director-General’s representative (Sherpa) at the G-20. In 2014, González launched the first Trade for Sustainable Development Forum, gathering public and private sectors to drive the debate on the greening of trade and addressing trade and climate change. She graduated in Law from the University of Navarre and has a postgraduate degree in European law from Charles III University of Madrid.