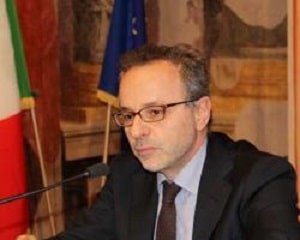 Armando Barucco, Minister Plenipotentiary, is the current Director of the Unit for Analysis and Policy Planning at the Italian Ministry of Foreign Affairs and International Cooperation. In this position, he has also been in charge for the MFAIC of the organization of the last 5 editions of the Rome MED-Dialogues (2016-2020). He served from November 2011 to February 2015 as Italian Ambassador to Sudan, where he played a major role in the solution of several controversial human rights cases, including the case of Meriam Ibrahim, the Sudanese woman sentenced to death for apostasy in April 2014. From 2007 to 2011 he worked as an “Antici” Counsellor at the Permanent Representation of Italy to the EU, in charge, inter  alia, of the preparation of E.U. Summits and Councils of Ministers. He was also responsible for institutional affairs, including the implementation of the Lisbon Treaty and the establishment of the EEAS. Other previous assignments were Consul general of Italy in Mumbai, India (2002-03); the Permanent Representation of Italy to the EU (2000-02); Italian embassy in Kuala Lumpur, Malaysia, where he served as deputy head of mission (1996-2000); the Directorate General of E.U Integration (three times: 1991-92; 1993-96; 2003-06). His first assignment as a diplomat was in Mogadishu (Somalia), where he was deputy Head of the Italian diplomatic delegation during the civil war and the United Task Force (UNITAF) and United Nations Operation in Somalia (UNOSOM) operations (1992-93). Mr. Barucco is a Fellow of the Weatherhead Centre for International Affairs of Harvard University (academic year 2006/7). He holds an LL.M (Philosophy of the Law – University of Rome La Sapienza) and a Degree in High European Legal Studies (College of Europe – Bruges). He conducted extensive studies and research at the Institute for the Study of Religion and Culture of the University Gregoriana in Rome.