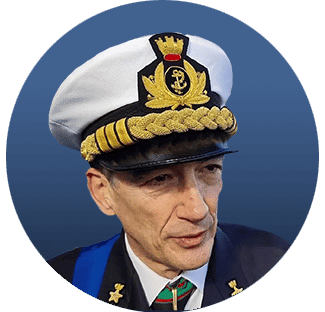 Admiral De Carolis is specialized in Telecommunications, Conduct of Operations and Electronic Warfare. Prior to his current role, he was then Assistant to the Chief of Naval Staff (2008-10), Military Assistant and Aide-de-Camp to the President of the Republic (2011-13), Office Chief and Communications Assistant to the Chief of Defense Staff (2013- 16), Chief of the 3rd Planning and Strategy Department of the Naval General Staff as well as Chief of the Amphibious Department and Commander of the Amphibious Force (2016-17).

In 2017-2019, he was Commander of the Second Naval Division and of the Italian Maritime Forces within the Rapid Reaction Forces of the Atlantic Alliance (NATO Response Force – NRF). In 2019-2021, he held the position of Deputy Chief of Staff of the Navy.

He has a degree in Maritime and Naval Sciences, one in Physics, and a Masters degree in Business Administration.

He is a member of the Italian Institute of Navigation, of the US Naval Institute and of the Italian Group of the Société Internationale de Droit Militare et de Droit de la Guerre. He is honorary councilor of “LIFE”, an ONLUS that promotes sailing among students from disadvantaged families.