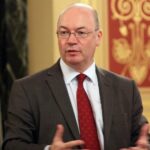 Burt Alistair was appointed Minister of State for the Middle East at the Foreign and Commonwealth Office and Minister of State at the Department for International Development in June 2017. He previously served as Minister of State for Community and Social Care at the Department of Health (2015-2016) and Parliamentary Under Secretary of State in the Foreign & Commonwealth Office (2010-2013). He entered Parliament for the first time in 1983 and was elected Conservative MP for north east Bedfordshire in 2001. Before entering politics Alistair worked as a solicitor.