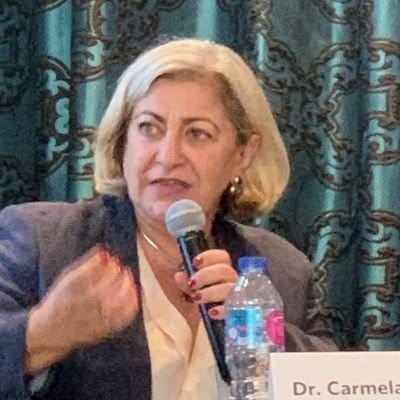 Ms. Carmela GODEAU (Italian Nationality) has been appointed Regional Director for Middle East and North Africa for IOM Egypt office on Jul 2015. Prior to this appointment, Ms. Carmela Godeau has been stationed in Dakar as the Regional Director for West and Central Africa since August 2011 to Jun 2015. Ms. Godeau was the Regional Programme Development Officer/Deputy Regional Representative at the Mission with Regional Functions (MRF) in Rome for six years. From 2001 through 2005, Ms. Godeau held the position of Chief of Mission, Syria and from 1994 through 2001 served with the MRF Cairo finishing as the Senior Operations and Development Officer/Deputy Regional Representative. Before joining IOM Ms. Godeau spent two years with UNRWA in Gaza Strip, Palestinian Occupied Territories, from 1989 to 1992 and seven years with the Egyptian Radio and Television Union as a Linguistic Expert (from 1982 to 1989).
Ms. Godeau studied Islamology at Pontificio Istituto d’Islamologia in Rome – Italy (1980) and holds a Master Degree in Literature (Oriental Languages, Arabic) from Instituto Universitario Orientale in Naples (1981); she attended Seminars on the Institutions in the Arab and Muslim World in the Nineteenth and Twentieth centuries (1985-1986) at CEDEJ (Centre d’Etudes et de Documentation Economiques, Juridiques et Sociales) in Cairo and graduated at Université Aix-Marseille I, Aix-en-Provence – France obtaining a Diplôme d’Etudes Approfondies Monde Arabe (1989).
ALL SPEAKERS & CHAIRS