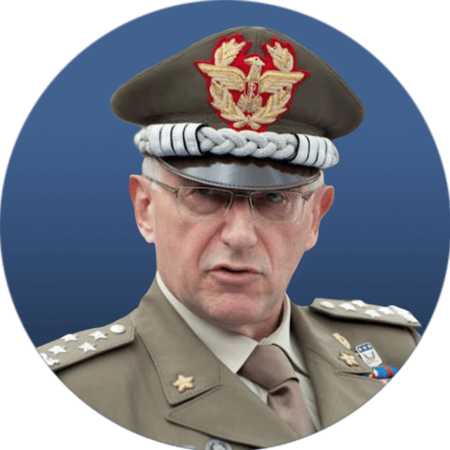 General Claudio Graziano graduated in Military Strategic Sciences from the Turin School of Application. He also holds degrees in Diplomatic and International Sciences from the University of Trieste, a Master’s degree in Strategic Sciences and a university specialisation in Human Sciences from the Augustinian Academy in Rome. In January 2010, he was promoted to the rank of Army General, and in February of the same year, he was appointed Chief of Staff to the Minister of Defence. In October 2011, he was appointed Chief of Staff of the Army and subsequently promoted to the rank of General. From February 2015 to November 2018, he was Chief of Defence Staff. Appointed in November 2017, he served as Chairman of the European Union Military Committee from 6 November 2018 to 15 May 2022. A recipient of numerous decorations, he was awarded 5 Solemn and 9 Simple Commendations. He was also awarded honorary citizenship of the Province of Tyre (Lebanon) and of the municipalities of Villanova d’Asti and of Fontanile (AT) and of the city of Biella. He is the author of numerous books, studies and articles.