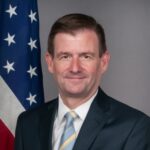 David Hale is the Under Secretary of State for Political Affairs.  He was the Ambassador to Pakistan (2015-18), Ambassador to Lebanon (2013-15), Special Envoy for Middle East Peace (2011-2013), Deputy Special Envoy (2009-11), and Ambassador to Jordan (2005-8). Earlier, he had multiple tours in Jordan and Lebanon and served in Tunisia, Bahrain, Saudi Arabia, and at the U.S. Mission to the UN. In Washington, Hale was Deputy Assistant Secretary of State for Israel, Egypt and the Levant and Director for Israel-Palestinian Affairs.  He held several staff posts, including Executive Assistant to Secretary of State Albright. Mr Hale joined the Foreign Service in 1984 and holds the rank of Career Ambassador.