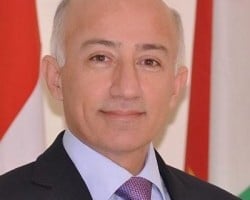 Professor Dlawer Ala’Aldeen is the Founding President of the Middle East Research Institute, former Minister of Higher Education and Scientific Research in Kurdistan Regional Government (2009-2012), and Professor of Medicine in Nottingham University, UK. He studied tropical medicine at the London School of Hygiene & Tropical Medicine and trained for a PhD in molecular microbiology at the MRC Clinical Research Centre, Harrow-London, UK. He was awarded the MRC Research Fellowship before being appointed as a clinical academic at Nottingham University Hospitals NHS Trust] in 1992 and Professor of clinical microbiology in 2002. He founded the Meningococcal Research Group in 1995, which then expanded into the Molecular Bacteriology and Immunology Group at Nottingham University in 1999. He was also the Founding Director of the MSc course in Clinical Microbiology at Nottingham University.  He was appointed to the Health Protection Agency (later renamed Public Health England) as Deputy Director of the Centre for Infection in Colindale, London. Dlawer was appointed as the Director of Research at the Royal College of Pathologists in 2009.