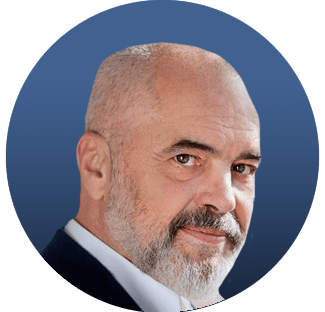 Edi Rama is a politician, artist, writer, and the current Prime Minister of Albania. He is also the leader of the Socialist Party of Albania since 2005. He gained power in 2013, leading a coalition of left parties to a landslide victory, on a platform named “Renaissance for Albania”. It was based on four pillars, European integration, economic revitalization, restoration of the public order and democratization of state institutions. In 2017, Rama won a second term, with the Socialists becoming the first in 25 years to achieve a single party majority in parliament.

Rama served as Minister of Culture, Youth, and Sports from 1998 to 2000, and was Mayor of Tirana for three consecutive terms from 2000 to 2011. Under his watch, Tirana experienced a total transformation, opening to colorful facades and daring architectural structures which led Rama to win the prize of “World Best Mayor” in 2004 and European Hero Award by Time Magazine.

In addition to politics, Rama is known for his passion for arts and sports. Rama is a professional painter, renowned for his unique colorful style. As a painter, Rama has held several exhibitions in New York, London, Berlin, Venice, Paris, etc. In his youth, Rama was also involved in sports as a professional basketball player for Dinamo Tirana and the Albanian national team.