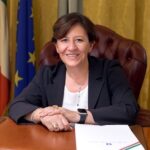 On 1st June, 2018, she was appointed Minister of Defence. She graduated in Political and Economic Sciences at ‘La Sapienza’ University, Rome (1994), and has a 20-year expertise as project manager. She was Senior Programme Manager for Development, Economics, and International Cooperation with SudgestAid, a company operating in post-conflict scenarios (Iraq, Afghanistan, Libya, Yemen, Lebanon). On assignment from the Ministry of Foreign Affairs, she was in Nassiriya, Iraq, to deal with governance issues with the local Provincial Reconstruction Team. On 30 July 2008 she was commissioned Captain of the Reserve. From 2013 to 2014, she was project manager in Libya for the reintegration of former combatants into the Archaeological Sites Task Force. Moreover, Mrs. Trenta has a wide-ranging expertise in EU projects and procedures.