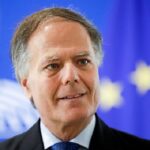 Enzo Moavero Milanesi has been Italy’s Minister for Foreign Affairs and International Cooperation since May 2018. He also served as Minister for European Affairs from November 2011 to February 2014. He was Judge and President of Chamber at the General Court of the European Union from 2006 to 2011. Previously, he worked at the European Commission, where he was, inter alia, Deputy Secretary-General of the European Commission (2002-2005) and Director General of the Bureau of the European Policy Advisors (2005-2006). He was Professor of European Law at various academic institutions (the Sapienza University of Rome, the Bocconi University of Milan, the College of Europe of Bruges, the LUISS University of Rome). Between 2014 and 2018, he was also Director of the “School of Law” of LUISS University.