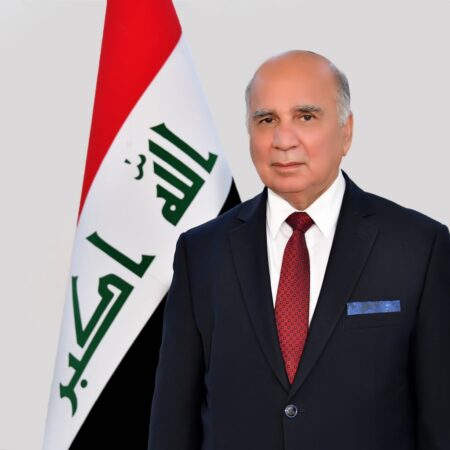 Dr. Fuad Hussein was appointed as Iraq’s  Minister of Foreign Affairs in June, 2020. Dr. Fuad Hussein is a longtime activist of the Kurdish cause and resistance. During his studies at the University of Baghdad, he joined the Union of Kurdish Students and later the Kurdistan Democratic Party (KDP) of General Mustafa Barzani. He completed his curriculum with a PhD in International Relations in the Netherlands. In addition to his work as an academic and independent consultant on the Middle East, he campaigned within the Patriotic Union of Kurdistan (PUK) created in 1975 by the Kurdish leader Jalal Talabani who later became president of the Iraq. In 1987, he was elected as vice-president of the Kurdish Institute, a position he held until his return to Iraq during the American intervention in 2003. During his stay in Baghdad where, appointed deputy minister of National Education, he notably organized the preparation of new “debaathized” textbooks for Iraqi schools. He then moved to Kurdistan where he became Director of Cabinet for President Massoud Barzani, a post he held until the Iraqi elections of 2018. Dr. Fuad Hussein was appointed Minister of Finance and Deputy Prime Minister in the new Iraqi cabinet of Dr. Adel Abdulmahdi until March 2020.