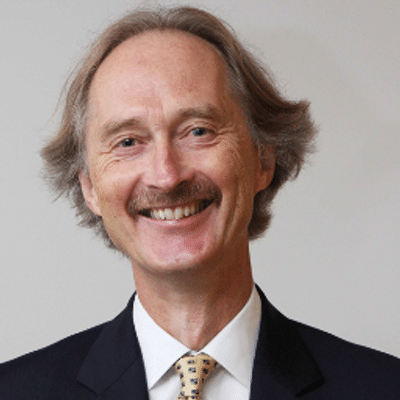 Mr. Pedersen has been appointed as Special Envoy for Syria in October 2018. He brings to this position decades of political and diplomatic experience, having served both in government and United Nations capacities, most recently as Norway’s Ambassador to the People’s Republic of China (since 2017) and as Permanent Representative of Norway to the United Nations (2012 to 2017). Mr. Pedersen served the United Nations in various roles, including as Special Coordinator for Lebanon (2007 to 2008) and as Personal Representative of the Secretary-General for Southern Lebanon (2005 to 2007).  He also worked as Director of the Asia and Pacific Division in the Department of Political Affairs. Between 1998 and 2003, Mr. Pedersen served as the Norwegian Representative to the Palestinian Authority.  From 1995 to 1998 he held different positions at the Norwegian Ministry of Foreign Affairs in Oslo, among them as Chief of Staff for the Norwegian Foreign Minister. In 1993, he was a member of the Norwegian team to the Oslo negotiations that led to the signing of the Declaration of Principles and the mutual recognition between the Palestine Liberation Organization (PLO) and Israel.