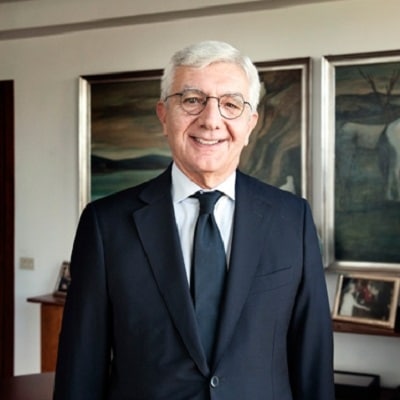 Giovanni De Gennaro has been Chairman of Leonardo S.p.a. since 4 July 2013. Born in Reggio Calabria in 1948, he graduated in Law at the University of Rome La Sapienza. After completing his military service obligations as a reserve officer in the Army and a short stint working at the Treasury, he joined the Ministry of the Interior, in the role of Senior Police Officer. He spent most of his professional career in the Police Force (until 1994), when he was appointed Prefect, First Class. In 2000 he was appointed Chief of Police – Director General of Law Enforcement. Subsequently, in 2007, he was made Head of Cabinet at the Department of the Interior. During this appointment, due to the exceptional severity of the crisis related to the disposal of waste in Campania, the Government entrusted him for a period of 120 days with temporary management of the emergency, appointing him Special Commissioner. In 2008 he was appointed Director General of the Department of Security Information (DIS), with the additional task of implementing, the regulatory and organizational aspects of, the complex reform of the information services commissioned by Parliament in 2007. In 2012, the Council of Ministers appointed him Undersecretary of State to the Prime Minister’s Office, responsible for the information and security services. On behalf of the Government, he took part in the approval process, voted unanimously by Parliament, for further partial regulatory reform of the law on information services, with particular reference to the delicate matter of State secrets. In 2000 he was honoured with the title of Knight Grand Cross of the Order “Merit of the Republic”. In 2014 he has been appointed Chairman of the Center for American Studies.