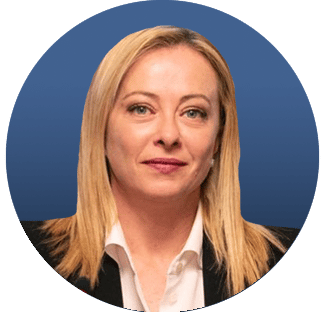 President of the Council of Ministers | Italy

Giogia Meloni began her political commitment at the age of 15.

In 1998 she was elected councilor of the Province of Rome for the National Alliance, remaining in office until 2002. In 2006 she was elected for the first time to the Chamber of Deputies.

In December 2012 you founded, together with Guido Crosetto and Ignazio La Russa, the political movement “Brothers of Italy (Fratelli d’Italia)- National Center-right”. In 2016 she was candidate for mayor of Rome.

On 28 September 2020 she was unanimously elected President of the European Conservatives and Reformists Party (ECR Party).

She has published two books.