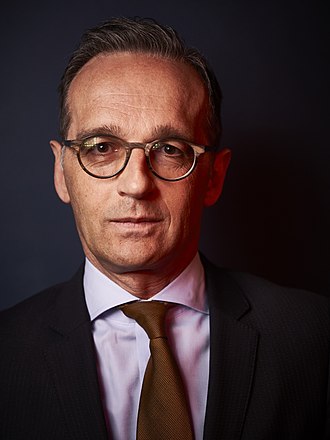 Heiko Josef Maas was appointed as Germany’s Minister of Foreign Affairs, in the fourth cabinet of Angela Merkel, in 2018. He served as the Federal Minister of Justice and Consumer Protection from December 2013 to March 2018. He is a member of the Social Democratic Party. Maas is a lawyer by profession. Before his appointment to the federal cabinet he was active in state politics in Saarland, where he served as Minister of the Environment, Energy and Transport (1998–1999), Minister of Economy, Labor, Energy and Transport (2012–2013) and Deputy Minister-President (2012–2013). Maas was first elected to the Saarland Parliament in 1996, under the mentorship of Oskar Lafontaine. He served as Minister of the Environment, Energy and Transport from 9 November 1998 to 29 September 1999. He studied law at Saarland University, and he passed his first state examination in 1993 and was called to the bar in 1996.