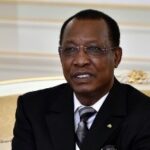 Born in 1952 in Berboda, Idriss Déby Itno is President of the Republic of Chad. Graduated in aeronautics, he participated in the rebellion movement from 1980 to 1984 against Goukouni Oueddei. Finding himself in disagreement with the new power, he went into exile from 1989 and created in 1990 the Patriotic Movement of Salvation (MPS). The same year, his forces seized N’Djamena and expelled Habré from power, which he seized on December 4. He was officially elected in 1996, 2001, 2006 and 2011 with 88% of the vote.