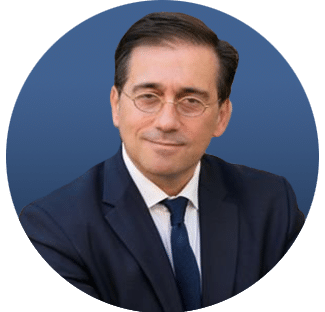 José Manuel Albares Bueno was named Minister of Foreign Affairs, the European Union and Cooperation of the Kingdom of Spain on 10 July 2021. Mr. Albares was born in 1972 and is a career diplomat and he previously served as the Ambassador of Spain to the French Republic and the Principality of Monaco.He has been Secretary-General for International, European Union, G20 and Global Security Affairs at the Office of the President of the Government. In this capacity, he was the President of the Government’s Sherpa for both the European Union and the G20.Over the course of his career, Mr. Albares has been Spanish Consul in Colombia, Counsellor for Culture at the Spanish Embassy in Paris, and held a post at the Spanish Permanent Representation to the Organization for Economic Cooperation and Development (OECD). During his posting at the OECD he was elected Vice-Chair of the Development Assistance Committee (DAC). At the Ministry of Foreign Affairs, the European Union and Cooperation, he has held different management positions, both in Foreign Affairs and at the Spanish Agency for International Development Cooperation (AECID).