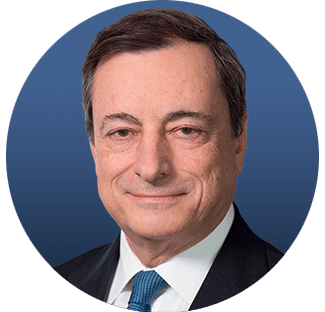 Mario Draghi has been President of the Council of Ministers of Italy since 13 February 2021. From November 2011 to November 2019, Mario Draghi served as President of the European Central Bank, as well as the Chair of the European Systemic Risk Board.  From 2006 to October 2011 he served as Governor of the Banca d’Italia. Between April 2006 and November 2011, he was Chairman of the Financial Stability Forum (later the Financial Stability Board). Between 2002 and 2005, Draghi was Vice Chairman and Managing Director at Goldman Sachs International. He was Director General of the Italian Treasury (1991-2001), Chairman of the European Economic and Financial Committee (2000-2001), and Chairman of the OECD’s Working Party No 3 (1999-2001). From 1984 to 1990 he was an Executive Director of the World Bank. Draghi has been a member of the Board of Trustees of the Institute for Advanced Study in Princeton since 2009. He was previously an Honorary Trustee of the Brookings Institution and an Institute of Politics Fellow at the John F. Kennedy School of Government at Harvard University. Between 1975 and 1981, he was Professor of Economics at the Universities of Trento, Padua and Venice. Between 1981 and 1990 he was Professor of Economics at Università degli Studi di Firenze.