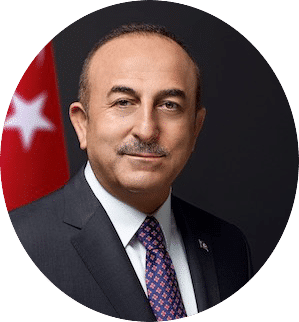 Mevlüt Çavuşoğlu was appointed as the first Minister of Foreign Affairs of the Presidential System of Government in July 2018. He has served as Minister for EU Affairs and Chief Negotiator of the Republic of Turkey between Dece. 2013 and 29 Aug. 2014, and as the Minister of Foreign Affairs between Aug. 2014 and Aug. 2015. Between 2003-2014, at the Parliamentary Assembly of the Council of Europe (PACE), he served as Vice President and chairman of various committees such as the Committee on Migration, Refugees and Population, Committee on Economic Affairs and Development, and others. He was also the 2nd Vice Chairman and Chief Whip of European Democrat Group (EDG). He was elected as the President of the Parliamentary Assembly of the Council of Europe (PACE) during 2010-2012 and is the first Turkish parliamentarian to hold this office. He was granted the title of Honorary President of the PACE in 2014. He was the PACE representative at the Venice Commission from Jan. 2012 to Jan. 2014. Moreover, he served as the Chairman of the Turkish Delegation to the European Security and Defence Assembly (Assembly of Western European Union) between 2007 and 2010.