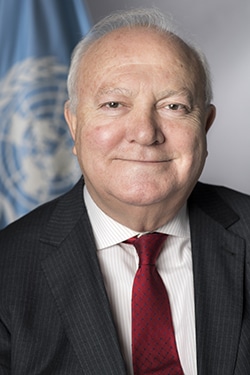 H.E. Mr. Moratinos is the High Representative of the United Nations Alliance of Civilizations (UNAOC) since January 2019. During his professional and political career he has served as Minister of Foreign Affairs and Cooperation of Spain (2004-2010), Deputy Director General for Northern Africa (1987-1991), Director of the Institute of Cooperation with the Arab World (1991-1993), Director General of Foreign Policy for Africa and the Middle East (1993-1996), Ambassador of Spain to Israel (1996), and the EU Special Representative for the Middle East Peace Process (1996-2003). As the top diplomat in Spain, he represented his country presiding over the UN Security Council in 2004, holding the chairmanships-in-office of the OSCE, the Council of Europe and the Council of the European Union. In recognition for his distinguished achievements, he received honorary doctorates from the Universities of Saint-Petersburg, Malta, as well as Ben-Gurion, Al-Quds and Tel Aviv.