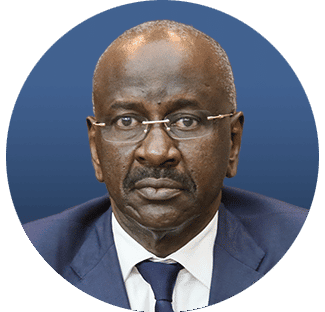 Mohamed Salem Ould Merzoug is the Minister of Foreign Affairs of Mauritania. Before his tenure as minister, he served as a diplomatic advisor to the President of the Republic of Mauritania. Prior to this charge, he worked for international organizations: from 2010 to 2013 he was World President of the International Network of Basin Organizations (INBO) and from 2002 to 2013 he was the High Commissioner of the Organization for the Development of the Senegal River (OMVS). In 2008, he received the Oscar for Excellence and Leadership from the International Council of African Managers. From 1997 to 2001, he served in several ministries: he was Minister of Health and Social Affairs, Minister of Justice Keeper of the Seals, Minister of Hydraulics and Energy and Minister of Equipment and Transport. Dr. Merzoug has also worked as an international consultant for various Agencies (FAO, UNDP, UNEP…) and from 1994 to 1996 he was responsible for external relations of the Mauritanian League for Human Rights (MLHR).