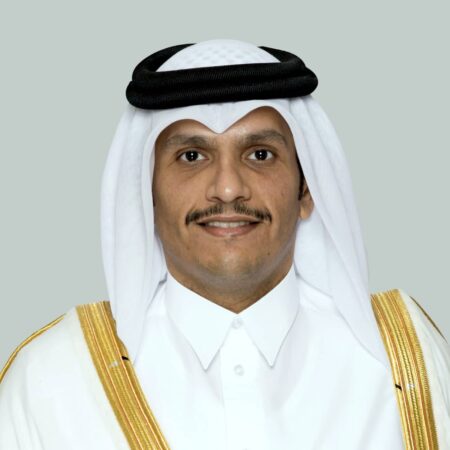 Mohammed bin Abdulrahman bin Jassim Al-Thani has been Qatar’s Minister of Foreign Affairs since January 2016. In 2003 he joined the Supreme Council for Family Affairs as an economic researcher and was then promoted until he reached the position of Director of Economic Affairs (2005-2009). He was appointed manager for the project supporting and developing small and medium-sized state enterprises at the Ministry of Business and Trade in March 2009, and Secretary of the Personal Representative of the Emir of Qatar for Follow-up Affairs at the Emiri Diwan in June 2010. In 2011 he became Chairman of the Executive Committee of the Development of Small and Medium-sized Enterprises and Chairman of the Board of Directors of Aspire – Katara Investment Company. He attained the rank of Under Secretary in 2012. In January 2014 he was nominated Assistant Foreign Minister for International Cooperation Affairs.