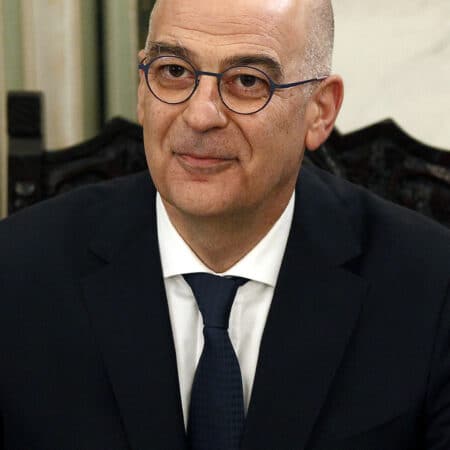 Nikos Dendias is a Greek lawyer and politician, and as of 2019 he is the Greek Minister of Foreign Affairs. From January 2016 until the declaration of the 7 July 2019 elections, he was the Parliamentary Representative for New Democracy. Previously he served as Minister for National Defence from November 2014 to January 2015, Development and Competitiveness Minister from June 2014 to November 2014, Minister for Public Order and Citizen Protection from June 2012 to June 2014, and Minister for Justice from January 2009 until the national elections of 4 October 2009. He has also served on many Parliamentary Committees and is a member of the Council of Europe’s Committees on Migration and Legal Affairs. He was elected Chair of Council of Europe Committee on Migration for 2013, and Vice-Chair for 2012. He is a graduate of Athens College and graduated with distinction from the University of Athens Law School. He holds a Master of Laws (LL.M.) from the University of London, with specialization in Shipping and Insurance Law at University College (UCL), and a Masters Degree in Criminology from the London School of Economics and Political Science (LSE).