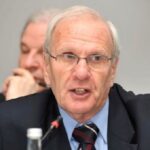 Oded Eran is a Senior Research Fellow at the Institute for National Security Studies, served as Director of INSS from July 2008 to November 2011, following a long career in Israel’s Ministry of Foreign Affairs and other government positions. In his most recent post before joining INSS, Dr. Eran served as the World Jewish Congress Representative in Israel and the Secretary General of the WJC Israel Branch. From 2002-2007, he served as Israel’s Ambassador to the European Union (covering NATO as well). Prior to that (1997-2000) he was Israel’s Ambassador to Jordan, and head of Israel’s negotiations team with the Palestinians (1999-2000). Other previous positions include Deputy Director General of the Ministry of Foreign Affairs, and the deputy chief of the Israeli embassy in Washington. Between 2007-2013 he served as an advisor to the Knesset sub-committee on Foreign Affairs.