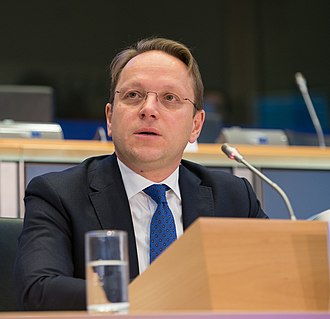 Olivér Várhelyi is a Hungarian lawyer and diplomat, and European Commissioner for Neighbourhood and Enlargement from Hungary in the von der Leyen Commission since 2019. Várhelyi started his career in the Hungarian public administration in 1996 at the Ministry for Industry and Trade. He then moved to the Foreign Affairs Ministry, where he was tasked with alignment with the EU acquis. From 1998 to 2001 he was chief of cabinet of the head of the legal unit of the ministry. He then moved to Brussels at the Hungarian’s mission to the EU, as legal counselor and then head of legal service until 2006, after Hungary’s EU accession. For two years Várhelyi then served as head of the EU law department at the Hungarian Ministry of Justice. From 2008 to 2001 he briefly served as head of unit at the European Commission, in charge of industrial property rights at the Directorate General Internal Market and Services. He then moved back to the Hungarian foreign service, service from 2011 onward as deputy head and then from 2015 head of the Permanent Representation in Brussels, with the rank of ambassador extraordinary and plenipotentiary. Várhelyi obtained a Master of European Legal Studies at Aalborg University, Denmark, in 1994, and a Law degree at the University of Szeged, in 1996. In 2005 he passed the bar exam.