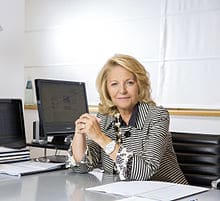 Maria Patrizia Grieco has been the Chairman of the board of directors of Enel since May 2014. She started her career in 1977 at Italtel, where in 1994 she became chief of the Legal and General Affairs directorate. In 1999, she was appointed General Manager to re-organize and reposition the company, and in 2002 she became Chief Executive Officer. Subsequently, she held the positions of Chief Executive Officer of Siemens Informatica, Partner of Value Partners and Chief Executive Officer of the Group Value Team (today NTT Data). From 2008 to 2013, she was Chief Executive Officer of Olivetti, where she also held the role of Chairman from 2011. She has been a director of Fiat Industrial and CIR and she is currently on the boards of Anima Holding, Ferrari and Amplifon. Mrs. Grieco is also a member of the steering committee of Assonime and of the board of directors of Bocconi University. Maria Patrizia Grieco was appointed Chairman of the Italian Corporate Governance Committee in 2017.