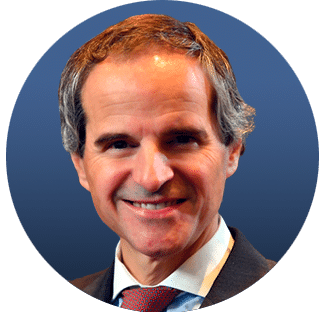 Rafael Mariano Grossi was appointed as IAEA’s Director General in 2019. Mr Grossi is a diplomat with over 35 years of experience in the field of non-proliferation and disarmament. In 2013, he was appointed Ambassador of Argentina to Austria and Argentinian Representative to the IAEA and other Vienna-based International Organizations. In 2019, Mr Grossi acted as President Designate of the 2020 Review Conference of the Parties to the Treaty on the Non-Proliferation of Nuclear Weapons (NPT), and from 2014 to 2016 he served as president of the Nuclear Suppliers Group, where he was the first president to serve two successive terms. In 2015, he presided over the Diplomatic Conference of the Convention on Nuclear Safety, securing unanimous approval for the Vienna Declaration on Nuclear Safety – a milestone in international efforts in the wake of the 2011 Fukushima Daiichi nuclear accident. From 2010 to 2013, he served as Assistant Director General for Policy and Chief of Cabinet at the IAEA. Previously, he held several senior positions in the Argentinian Foreign Service, including as Political Affairs Director General from 2007 to 2009. Mr Grossi was Chief of Cabinet at the Organization for the Prohibition of Chemical Weapons (OPCW) in The Hague from 2002 to 2007. Prior to this, he held several positions within the Argentinian Foreign Ministry after joiningin 1985, including Chief of Embassy in Belgium and Luxembourg from 1998 to 2002, and Argentinian Representative to NATO from 1998 to 2001. Since 2017, Mr Grossi has been an International Gender Champion, promoting gender balance in the nuclear field. In 1983 he graduated from the Pontifical Catholic University of Argentina with a Bachelor’s in Political Sciences, and in 1997 he graduated from the University of Geneva and the Graduate Institute of International Studies with a master’s and PhD in International Relations, History and International Politics.