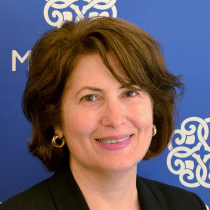 Randa Slim is a senior fellow and director of the Program on Conflict Resolution and Track II Dialogues at the Middle East Institute in Washington DC, and is a non-resident fellow at the Foreign Policy Institute of the Johns Hopkins University School of Advanced International Studies (SAIS). A former vice president of the International Institute for Sustained Dialogue, Slim has also been a senior program advisor at the Rockefeller Brothers Fund, a guest scholar at the United States Institute of Peace, a program director at Resolve, and a program officer at the Kettering Foundation. A former member of the Dartmouth Conference US-Russian regional conflicts taskforce, she was a member of the US-Russia mediator team in the Inter-Tajik Dialogue (1992-2000) and worked on conflict management activities in Tajikistan and the Ferghana Valley (2000-2006). Since 2002, Slim has developed and managed a number of dialogue and peace-building projects in the Middle East including the Arab-American-European Dialogue (2004-2009), the Iraqi National Reconciliation Initiative (2006-2009), the Middle East Dialogue (2012- ongoing) the US-Russia Middle East Taskforce (2016- ongoing) and the U.S.-Turkey Initiative (2019-ongoing). Slim has also worked on the UN-mediated negotiations in Yemen as a consultant with the office of the UN Special Envoy for Yemen.