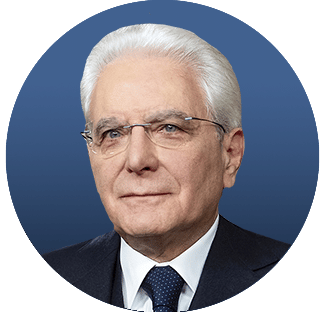 President of the Republic | Italy

Sergio Mattarella holds a Law Degree from “La Sapienza” University of Rome and was admitted to the Palermo Bar Association in 1967. He taught parliamentary law at the Law School of the University of Palermo until 1983, when he took leave of absence upon being elected member of the Chamber of Deputies.

In 1983 he was elected to Parliament, and remained a member of the Chamber of Deputies until 2008.

In 1987-1989 he was Minister for Relations with Parliament, and Minister of Education in 1989-1990. He became Deputy Prime Minister in October 1998 and Minister of Defence from December 1999 to the June 2001 elections. He did not run for the 2008 political elections and ended his political activity.

In May 2009 Parliament elected him member of the Bureau’s Council for Administrative Justice, of which he was elected Deputy Chairman.

He was elected twelfth President of the Republic on 31 January 2015.

On 29th January 2022, he has been re-elected President of the Republic.